Skip to main content
Home > Who We Are > News/Press > Promising Approaches to Test for, Prevent, or Treat HIV and Other STIs: A Recap from CROI 2022

Promising Approaches to Test for, Prevent, or Treat HIV and Other STIs: A Recap from CROI 2022 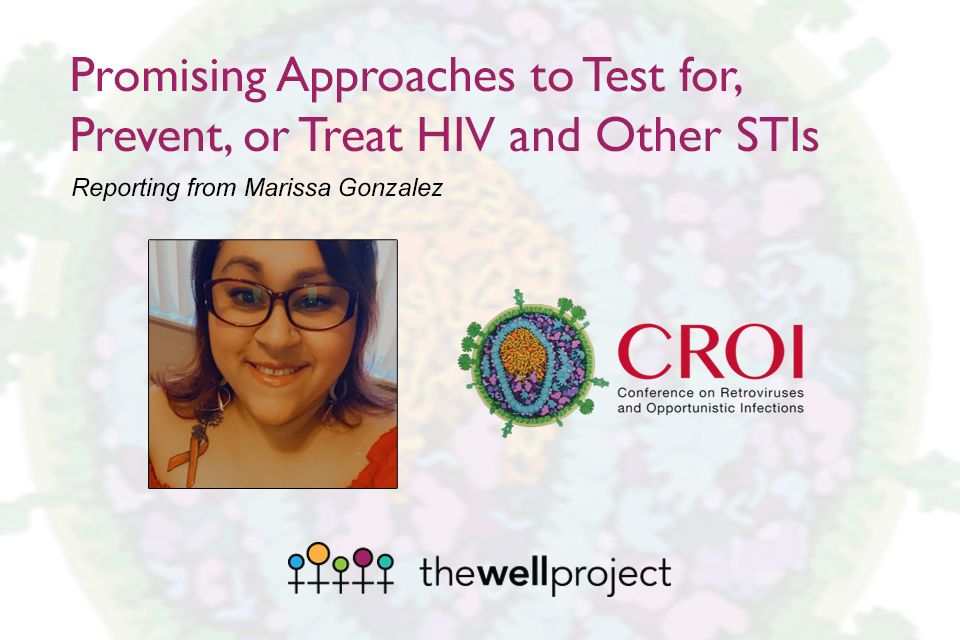 Could PrEP or PEP for STIs Work?

The session "Sexually Transmitted Infections Prophylaxis, is this the Answer?" was presented by Elizabeth A. Bukusi, MBChB, MD, MPH, PhD, PGD, MBE, of Kenya Medical Group, and proved to raise more questions than answers. (View a video of this presentation on the CROI platform)

Women’s STIs often do not have symptoms. What are consequences in women of STIs that are not treated?

Prophylaxis is defined as "the action to prevent disease, especially by specified means or against a specified disease" – in this instance, sexually transmitted infections (STIs). We know all about pre-exposure prophylaxis (PrEP) to prevent HIV, and the word is spreading worldwide where, we also know, more than 1 million curable STIs are acquired daily. Are there instances where this kind of prevention ought to be used with other STIs beyond HIV? Consider a young woman who may be engaged in sex work, for example. She may have an unknown number of partners, which can lead to frequent exposures to and treatment for STIs (though often partners are unknown and cannot also be treated) – as Bukusi explained in her presentation.

Why is this global rise in STIs occurring? Is it thanks to a rise in STI testing? Or possibly due to a decrease in condom use and/or decreased fear of intercourse due to U=U (Undetectable Equals Untransmittable) and PrEP? Are STI diagnoses a motivator for people to begin PrEP treatment?

There seem to be relatively high rates of STIs among women living with HIV, but what are the best strategies to prevent this? Symptom management, contact tracing, testing, or expedited partner(s) treatment (getting STI drugs to partners of people who are diagnosed)? Each is effective in some ways, not so much in others. Is treatment alone enough to manage STIs, or do we need a combination of treatment and some kind of prevention other than condoms, like we have with HIV?

Yet again more questions, few answers. Now think about the fact that women's STIs often do not have symptoms. What are consequences in women of STIs that are not treated? They are mostly related to issues while trying to conceive, complications during pregnancy and birthing, vertical transmission, pelvic pain or disease, and potential vulnerability to contracting HIV.

Two studies of gay and bisexual men who took an antibiotic daily, or in the days after sex (which would be post-exposure prophylaxis, or PEP), to prevent STIs showed reduction in acquiring many, though not all, STIs. There is currently a study of an antibiotic for STI prophylaxis that is focused on cisgender women taking HIV PrEP in Kenya which began February 2020 and is expected to end follow-up in November 2022. There are 449 cisgender women in the study; 59 percent are under the age of 25, 66 percent have never been married, 69 percent have delivered one or more children, and 57 percent are on long-acting reversible contraception.

There seem to be relatively high rates of STIs among women living with HIV, but what are the best strategies to prevent this?

So is prophylaxis the answer? In order to know that, we need to address the following:

There are many things to consider. In conclusion, at the moment it is difficult to determine whether the benefits will match the costs. All in all, more studies need to be conducted, including around drug resistance with prophylaxis; there needs to be a priority on figuring out what works for cisgender women; and there need to be inclusive data on those living with and without HIV.

In India, 24 percent of people living with HIV are unaware of their status. The Indian National Health Programme supports HIV testing in physical spaces but as programs near saturation, identifying new cases has been challenging. "HIV Self-Testing Uncovers High Burden of Hidden Infections in India" was presented by Jalpa Thakker of Project ACCELERATE at Johns Hopkins University School of Medicine in New Delhi, and was quite insightful! (View a video of this presentation on the CROI platform)

The increased number of people seeking sexual or romantic partners online inspired an approach that attempted to reach more people living with HIV. The objective was to evaluate a web-based platform that would provide at-home HIV testing services and linkage to care when needed. The SafeZindagi platform was created to offer virtual counselors the ability to contact clients on dating apps and social media platforms to then direct them back to their platform. SafeZindagi also collaborated with local groups that were designated as self-testing kit pickup sites.

This study was conducted from June 30, 2021 to December 31, 2021. In order to qualify for the self-testing kit, one had to be over the age of 18 and have never tested positive for HIV. The steps to enroll were relatively simple:

Once a test was completed, post-test counseling was available. Once results had been uploaded, individuals would be connected to prevention treatment if their screening test came back negative, or counseled to schedule a confirmatory test if it was positive. If confirmatory testing concluded positive HIV status, the individual was then linked to care for further treatment.

During the course of this study, 9,691 individuals registered on the platform within 28 different Indian states, and 2,306 ordered a test kit. Individuals who ordered kits were 73 percent male (79% of whom reported having sex with men), 13 percent female, 8 percent transgender, 6 percent unknown. The program was able to reach a younger age group – 46 percent of those who ordered were between the ages of 18 and 29 and 22 percent were 30-39. Condomless sex was reported in 73 percent of those ordering kits; 59 percent reported multiple partners; 13 percent reported engaging in sex work; and 3 percent reported using injection drugs.

There were 1,959 individuals who received a test kit, and results were uploaded for 1,794 of them. Of the uploaded results, 86 tests reflected a positive result. Forty-nine of them completed confirmatory testing and 40 were confirmed to be living with HIV. Of these individuals, 35 were successfully linked to treatment. This reflects a positivity rate of 5 percent – much higher than the 0.2 percent in India's general population.

In conclusion, the online platform proved to be possible and acceptable to use, and seemingly reached clients classified as "high risk" for HIV who were not being reached through other testing strategies. Continued efforts are being made to improve linkage to confirmatory testing and initiation to care and treatment.

As part of the session "HIV Prevention: From the Bench to Population," Magdalena E. Sobieszczyk, MD, of Columbia University gave a brief presentation on some very early findings about broadly neutralizing antibodies (bnAbs) for HIV prevention (possibly, eventually). (View a video of this presentation on the CROI platform)

Some bnAbs are used to treat or prevent COVID-19; more are being studied for HIV treatment and even HIV cure (which Katie Willingham wrote about for last year's CROI coverage). One unique thing about bnAbs is that they target conserved epitopes of the virus, meaning the virus may mutate, but the targeted epitopes will still exist.

Now for some definitions:

Some bnAbs are used to treat or prevent COVID-19; more are being studied for HIV treatment and even HIV cure.

The study focused on combinations of two or three of a total of four bnAbs, all given intravenously (into the veins) to 27 healthy individuals between the ages of 19 and 50 (median age was 26) who were not living with HIV. Sixteen of the participants were assigned female sex at birth, and 11 were assigned male sex. Two participants were Black, 19 were white, three identified as Hispanic, and six chose "Other." There were four research sites – two in New York City; one in Nashville, TN; and one in Boston, MA.

In this study, the first of its kind in humans, the bnAbs were found to be safe and well tolerated with no unexpected reactions. There was not a significant difference in half-life (a measure of how long a drug stays in the body) estimated between dual or triple bnAb combinations. The bnAbs also maintained their neutralizing ability. Results are being further investigated and may then inform the design of future combination bnAb studies for HIV prevention.