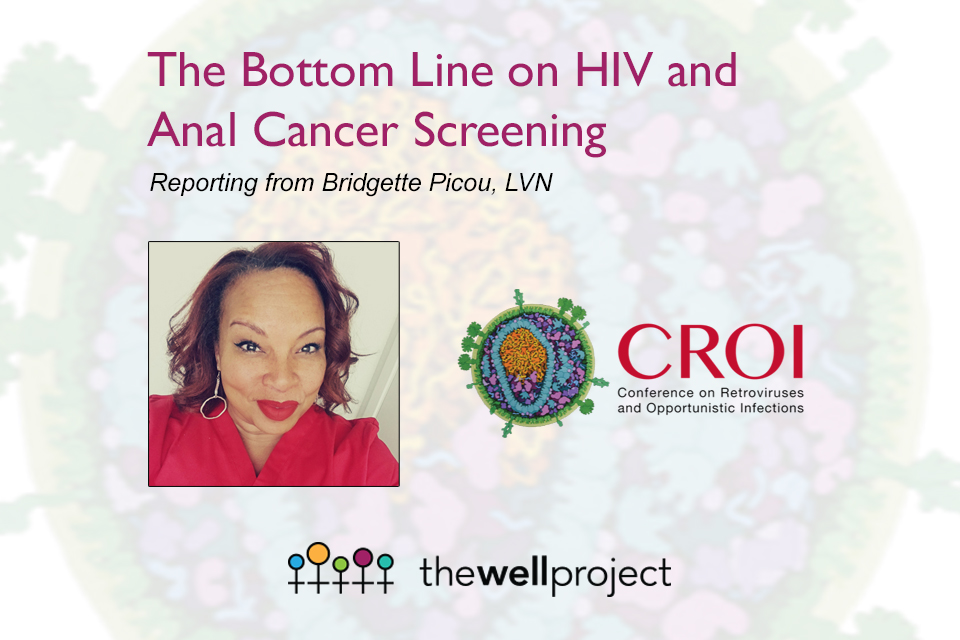 At the CROI 2022 conference this year I was pleased to see a session on a study I actually assisted on in my work as a nurse. It made me feel like I had contributed to science, no matter how minutely, and I am happy to share my takeaways and what I learned.

The study was stopped early because it was overwhelmingly showing that screening and treatment of HSIL reduced the risk of progression to cancer.

The results of this particular study also mattered to me for other reasons. Aside from the nurse-as-a-patient-advocate angle, learning about the effects of HPV was interesting, and the procedure used in the study was one of the first I learned to assist with in my career. I want to give you the picture of what anoscopy is before I share the study findings. Once an anal Pap determines to presence of HPV in the anus, the screening procedure can be done. It's called an anoscopy and the simplest way I know how to explain it is that it is comparable to a Pap smear in women, only it is done in the anus using a high-resolution camera to inspect the surface tissues and cells of the anus.

Briefly, the process is that the cells are highlighted with acetic acid (medical-grade vinegar), cross-stained (colored) with iodine, and viewed under the camera and microscope. Whether or not an area takes up the cross-staining is what alerts clinicians to areas of dysplasia, and is where the biopsies are collected to determine the level (measured in grades – 1, 2, or 3) of change. These are sent to the lab and are part of how the determination is made on what treatment will be recommended. Treatments consist of either hyfrecation (heat from an electric current) directly to the surface of the cells, topical creams or acids, infrared coagulation (light used to form a clot), or surgery in some cases.

Hopefully you aren't bored yet and are still with me! These were the basics of the study and its findings:

The study was stopped early because it was overwhelmingly showing that screening and treatment of HSIL reduced the risk of progression to cancer. The calculated incidence rate was 173 cases per 100,000 person-years and a 57 percent risk reduction. Nine people in the immediate treatment arm and 21 people in the active monitoring arm were diagnosed with invasive anal cancer. It was recommended that everyone in the monitoring arm be offered treatment, and study participants will continue to be followed. The study supports routine screening as part of the treatment of those living with HIV. You can now read more about this study and view a video of Palefsky's talk on the CROI website.

For my part, I'd like to see an increase in the number of clinicians trained in screening procedure and treatment, as well as an increase in who screening is offered to and how often. This screening starts with a simple swab to determine the presence of HPV. If you have never had an anal Pap, ask for one. Tell your friends to ask for one. This is not about behavior or sexual orientation. It's not about male or female, or being gay or hetero. HPV is prevalent, relevant to your overall health, and you can't fix what you don't know.

Do yourself a favor and get screened. The more people ask and make clinicians aware, the more mainstream the screenings can become.