Skip to main content
Home > Who We Are > News/Press > HEU, What's in a Name? or The Science in Perinatal HIV Exposure: A Recap from CROI 2022

HEU, What's in a Name? or The Science in Perinatal HIV Exposure: A Recap from CROI 2022 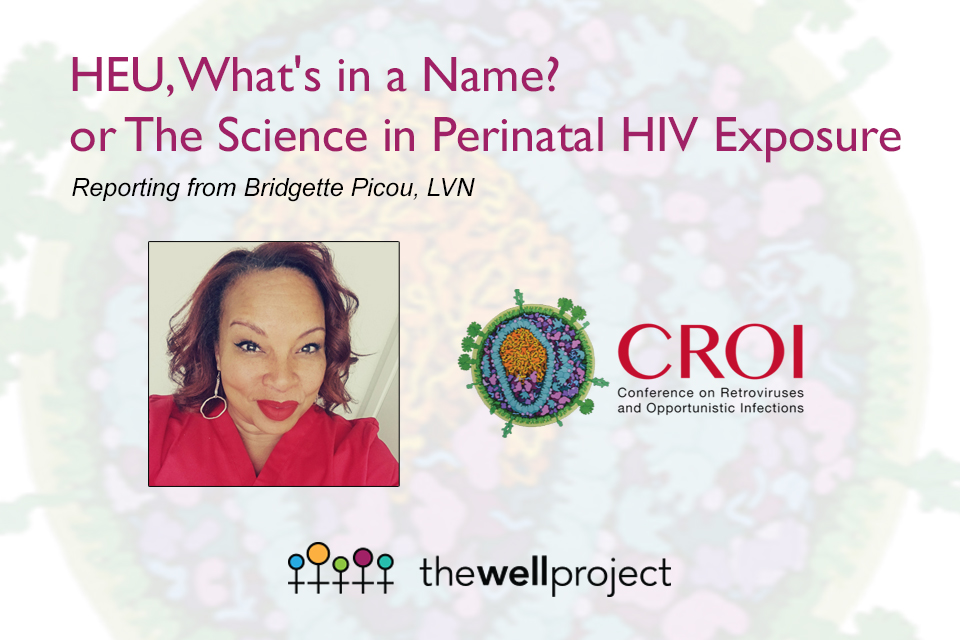 One of the scariest, most intimidating times of my life was pregnancy. My hormones were raging, my body was changing, and my brain worked overtime to anticipate the unknown. I was nervous, hopeful and prayerful. Those aren't even all the adjectives I could apply to it.

Babies who are born to moms living with HIV who are born negative fall into a group that I learned about this week. They are called HEU (HIV exposed but uninfected).

One thing I am now grateful for is that I did not have the additional layer of living with HIV on top of it. I am rarely without words, but I can't pick the right ones to describe the respect I have for women who face pregnancy with that added sheen of vulnerability and worry. The concerns of delivering a healthy baby are amplified by the desire to be able to deliver one that is HIV free. Thank God and Science that medicine has come so far as to make the likelihood of vertical transmission (also called perinatal or "mother-to-child" transmission) less than 1 percent. For a woman living with HIV who is pregnant or wanting to become pregnant, it is an incredible motivator to get in care and stay in care. I imagine birthing an HIV-free baby must feel like winning the lottery over and over with each negative test after birth.

Babies who are born to moms living with HIV who are born negative fall into a group that I learned about this week. They are called HEU (HIV exposed but uninfected). Personally, I dislike the context of any form of "infected" language when talking about people living with HIV, but I think it's nit-picking of me in this instance. The fact is that it's a blessing to have grown inside of a person living with HIV and remained free of HIV.

What happens to these babies as they grow into childhood, adolescence, and beyond into adulthood? Do they differ from children born to parents who are not living with HIV? Researchers and clinicians presented findings on this at the 2022 CROI conference this year. There was a plenary session called "Children Exposed to HIV, but Uninfected: Evidence for Action." There are an estimated 15 million people worldwide who were born to parents with HIV who did not acquire the virus. That's an incredible figure when juxtaposed against those we have lost to HIV. To use the word "uninfected" again for context, despite my dislike of it, the contrast is this: While they may be uninfected, they are not unaffected by HIV.

I believe I counted more than 25 abstracts and/or posters that addressed this topic to varying degrees. These were covered as a range of subcategories. Findings point to neurocognitive and developmental issues. There are metabolic effects such as low birth weight or obesity in adolescence. Effects on hearing were shown, with the timing of the start of HIV medications in utero (in the womb) impacting the level of loss: as many as 15 percent of children in one study had some hearing loss. The HIV drug regimen the mother was taking during her pregnancy – and whether it was considered optimized (best for mother and child) or not – seems to be another factor in development. There were studies on whether, and how, HEU children may respond to vaccines – if their immune B-cells are impacted and, therefore, how much protection the vaccines offer.

It's also important to note that not every child will necessarily have one or even any of these effects of having been HEU.

There is no way I can list all the abstracts and hold your attention, but really, once you get into it, it is fascinating how much is encompassed within the development of those exposed to and living without HIV. To roll all of these into one thought, these abstracts show cohesively that there are health disparities between CHEU and CHU (children who are HIV unexposed – never exposed in utero and never on HIV drugs). Many of these studies were done in sub-Saharan Africa, an area of the world where resources are often limited. My thought is that social determinants of health certainly must have an impact on the studies and the familial units experiencing those determinants. If you are unfamiliar, social determinants of health are things such as income, education, environment, accessibility of water and food and other factors like these. It would have been important to loop these into such studies, in my opinion, because many of these factors contribute to the how and why a person is exposed to HIV in the first place and are not limited to poorer countries.

It's also important to note that not every child will necessarily have one or even any of these effects of having been HEU, but it certainly brings to the fore the need to study and learn all we can. In fact, it strikes me as I type this that it is more important than ever as we move into the era of long-term medication therapies and new possibilities for achieving viral suppression like functional cures or even vaginal rings, which would obviously live near the womb where babies are carried.

These abstracts show cohesively that there are health disparities between CHEU and CHU (children who are HIV unexposed – never exposed in utero and never on HIV drugs).

These are impacts that never occurred to me, if I am being honest. I am probably much like the average person or advocate who felt so pleased and grateful to know someone who delivered an HIV-free baby. The possible long-term effects of that exposure to HIV medications wouldn't have been a thought if not for the CROI conference. It reinforces the emotional response I had to the conference which is that, while science has never been popular as a human condition, its influence on the condition of humans is undeniable and fundamental.