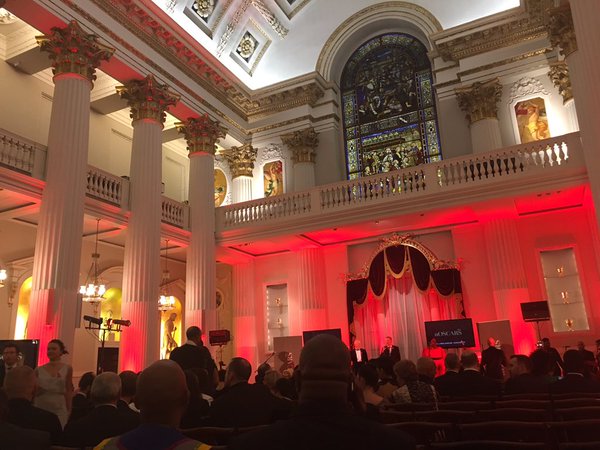 I enter a grandiose world of security and red carpets, regency furniture and high ceilings.  I am escorted, actually more like, guided with grace to the ballroom. Here it is gently suggested I get ready for my performance to royalty and other dignitaries. Good job, I look like the Queen! No it's not a dream, it's the nOSCARS at Mansion House, London. The venue kindly donated by the Lord Mayor as he was so impressed by the choir at WAD2014. Yes it's Joyful Noise, back again for season six and I've been given a one line solo, woohoo! I've been to most rehearsals and spent the afternoon preparing, painted nails, hair in an up do, some major make up, still I'm nervous and unsure, feeling way out of my comfort zone and I don't even recognise myself in the lift mirror. I'm taking the lift because even though it's just up one level, those stairs, beautiful as they are, are too much of a risk in 5-inch heels.

Deep breath Mel, close your eyes, feel your feet on the floor, do your mindfulness exercises, kick the heels off, it's going to be ok. But as each choir member arrives, glamourous and seriously scrubbed up, my stomach tenses. Face the fear and do it anyway my boyfriend texts, but soon enough we're up on stage for sound check and it's all ok. Ain't no mountain high enough, ain't no valley low enough. Ain't no river wide enough, to keep me from… singing loud and proud! As we stand together all worries disappear. We watch Daniel direct and sway left, right, left, the words flow, and the volume increases. The harmonies are a bit shaky, but it really doesn't matter, because we are all smiling and shining brightly and that's what it's all about.

So short rehearsal over and time to relax, enjoy and appreciate the opulence of our surroundings. Then the guests begin to arrive and we welcome them with rapture in the reception area and David and Leigh give a star performance. I notice the audience have their phones and iPads recording as they join the rejoicing. It's a common practice nowadays, and when I go to a concert, I do think, why can't people just enjoy it as it happens? Why does it have to be an experience to share on social media, especially as I end up watching on the mobile held up, that's blocking my view. But then I hear Paul talking to Marion and realise this is more than a lack of mindfulness in appreciating the moment. Yes of course this can't happen, and three years ago I would have been ducking out of view. I smile at the realisation of how far I have come, and then again, as once we are all seated it is compassionately explained. That it is not for anyone else to tell our story and the audience are respectfully asked to refrain from taking pictures. Then I'm up and follow Fraser with my line 'we're different and the same…' so true!

So solo out the way, interval, quick check, all ok, back home and we are allowed a glass of wine or two. Now the celebrations can begin, come on! Great comedy from Shazia, but is it really good times? Some hard hitting statistics about BAME (Black, Asian and Minority Ethnic) and HIV mean that the reality beyond the glitz is that there is still a big gap and need for support.

This last one got me, and then there was the sense of solidarity again, Angelina's hand on my shoulder, Are you ok? That's what Joyful noise is for me, not just the singing and exercise, but the contact, the understanding. The opportunity to just be, be me, in all my glory and grief. Then up again for Giampiero on the guitar, amazing!  It was all your emotions running through my fingers he wrote on the group WhatsApp after. Yet another way we have been supporting and sharing in between Wednesday evenings. He confessed last rehearsal he'd never played in public before, but you couldn't tell as he was 'raised up' to be 'all that he could be'. As am I. As I have written before, Joyful Noise has allowed me to share my status and reach heights that I would not have thought possible. As I read the programme I was thrilled to see my name there, as was Juliet to see hers and a photo! She didn't even know she had been nominated for the fellowship award. So what a fantastic emotional ending to the ceremony to see her accept, with tears, "I just came to sing" she said. But that's exactly why I was there and we both received so much more.