Do the bloods count? 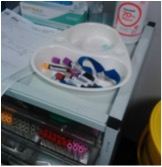 As I type the score, I want to share it's not a competition, or a game, but definitely a victory! I wrote a blog before about my fear and worry, when waiting for my counts after a blood test. One year later, so much has changed. The START* study has made a big difference. Simply, the research shows that the sooner you begin medication the better, removing the earlier recommendation to delay until CD4 was low. The medications available to me in the UK are better, less frightening and easier to adhere to; that's what I hear from my doctors and plwhiv.

However, it doesn't surprise me to read that plwhiv thrive more given medication as soon as diagnosed, when the explanation from the doctor prescribing them is clear and encouraging. I understand this result in a mindful perspective. If you are told initially it's going to be ok, your neural pathways grow in that direction. The placebo effect, you can believe you will get better and do. The Nocebo affect, the experience of being informed you are going to suffer, have possible side affects, it's a highly toxic drug, etc. That supports negative thinking, which can then become a reality. I am not saying the physiological affects are all in the mind; I was sick on AZT. I'm understanding it from a mind/body connection. Thoughts are powerful, and I have increased my awareness and it helps.

So I recognise I had an 'obsession' with keeping my counts good, focusing on the test date. I would plan around the appointment date to be in 'peak condition,' relaxed and nourished, so I could prolong not taking meds. The stories of diarrhea, nausea, nightmares and my previous experience made a scary scenario that was difficult to shift. This time though, my mind was in a very different place.  I went for testing just before #PAD2015 and it had been a really hectic time. I had been working with my business partner sorting the images, sharing, somehow destroying the database, and basically staying up all hours in what was a really exhilarating and exhausting week. So two weeks later when I went to get the results, I was thinking, well this is going to be a different reflection of my health, but I wasn't worried. I had lost the attachment, I was free. I said to my boyfriend, well it's win-win really. If they are low it's good, if they are high it's good I'll just start meds! That was when I realised how much had changed, this clinging on to the counts, focusing on figures, was unhealthy, and now I was able to really accept just what is!

VL 518 down, great! CD4 down 396 also down, ok, 47.5% up. Well now I'm confused, and so was my consultant so test again and wait and see. I wasn't worried about my boyfriend's test, but there was still relief when he had negative status confirmed. I said 'I'm good too' and it was an early Christmas celebration for us. Of course, two days later my default programming kicked in again and I wanted to understand the figures and what % really meant as this was usually consistent at 37ish. I was not worried or fearful, more a gentle curiosity, a need to compare. Anyway two weeks later more results back CD4 715 41.4%. Doc wrote, "You were probably just a bit run down".  Yes I was, but it was worth it. I still smile when I look at the facebook event and all those beautiful photos, and I'm already making plans for #PAD2016. So I have an instant pick me up, just a click away, that's gotta be the best medicine!