As we approach National Women and Girls HIV/AIDS Awareness Day on March 10, 2015, my mind is taking a magical mystery journey...

Start Date 1981, the beginning of what would be my 20 years as a Registered Nurse. There was a disease formerly known as GRID, now given a new name, HIV, Human ImmunoDeficiency Virus, and in the advanced stages called AIDS. I worked at North Carolina Baptist Hospital (Now Wake Health) a #1 rated Medical Center in my area. Even given that we were supposedly gifted with some of the medical community's greatest minds...people admitted with this virus were dying.

For me as a new nurse (I was 27, a single mother of 2, having attended nursing school after the break up of my 1st of 3 marriages) there were several things that went through my mind. My son was about to become a teenager, so when we were all watching the news and the virus was given a name, explaining how it was spread, etc., I told my son that no matter what, he was to respect himself and whomever he chose to eventually have sex with by always, always using condoms.

The other thing that was happening at the hospital...being the "new kid" on the floor...Typically assignments that others did not want went to the new kid. And whenever one of "those men" was admitted, I typically would be their nurse, the difference being...I was unafraid. They were someone's loved one...and my nursing philosophy to the day I stopped nursing was...every patient is someone's father, brother, mother, sister, son, or daughter...and I treated them as I wanted my family members treated.

What struck me though was...Where were the women?? Everyone knows that regardless of how the newly named HIV was classified...as a "gay man's disease"...where men were having sex, there were women they were also having sex with...and those women often were having sex with straight men...and so on and so on. Yet nowhere were we women mentioned in the early days...So in this humble woman's opinion (which ultimately proved true based on statistics) left several populations believing they were not at risk.

Little did I know while I was caring for those dying that 21 years later I would become one of the statistics...diagnosed with HIV in July 2002 at the end of what had become a very violent 2 plus year relationship. A relationship in which my then-boyfriend failed to share that he had previously been involved with a girl living with HIV.

I have never hidden my HIV status...though at the time I was told "You have HIV", I was working in a restaurant (I stopped nursing in 2000) and the owner told me that if I discussed my HIV, he would fire me. A little "fire" of resentment started burning within me, though I did not act upon it...yet!

I started my 3rd and thus far final relationship in 2004, each of which was "serodiscordant" (I live with the virus, they do not) nor were they infected by me during our relationship. Sadly this relationship showed signs of dissolution in 2008, resulting in my becoming very depressed, stopping my meds...leading to my diagnosis of AIDS (now called HIV Stage 3) and being hospitalized with Trigeminal Shingles! The relationship ended in December 2009, leaving me living in my car until it died. This led me into the healing arms of AIDS Care Service (ACS) here in Winston-Salem NC.

You may be saying by now...how does this have ANYTHING to do with Sister Warriors? WELL that was how I got to be a part of a wonderfully powerful group of women, each of us living with HIV, each of us having been through the storms to become amazing Sister Warriors.

I was not satisfied to just "be". I felt the need to "do". ACS gave me the courage and encouragement to reach further than Winston-Salem, further than North Carolina...

First stop AIDS Alliance Consumer Leadership Corps Training with the phenomenal Linda Scruggs. Though I technically didn't meet all the requirements for the course completion...it was extremely difficult to get the number of conversations required for completing the Corps Training (Talking about HIV in North Carolina remains a taboo topic even today). But the training itself led me to the Sisterhood!

In July 2012 the 19th International AIDS Conference was to be held in Washington D.C. I took a leap of faith (trusting a then-friend) and signed up to be a volunteer for 10 days around AIDS 2012. 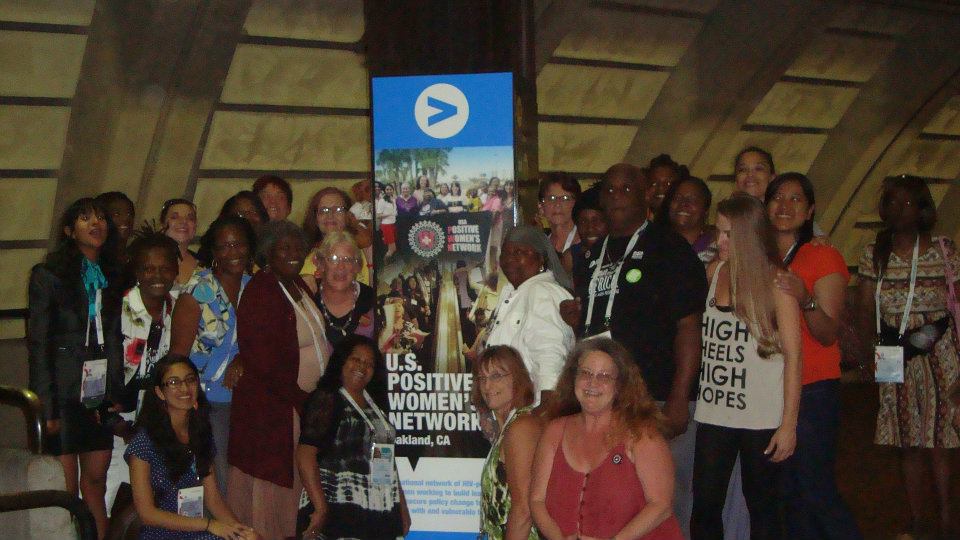 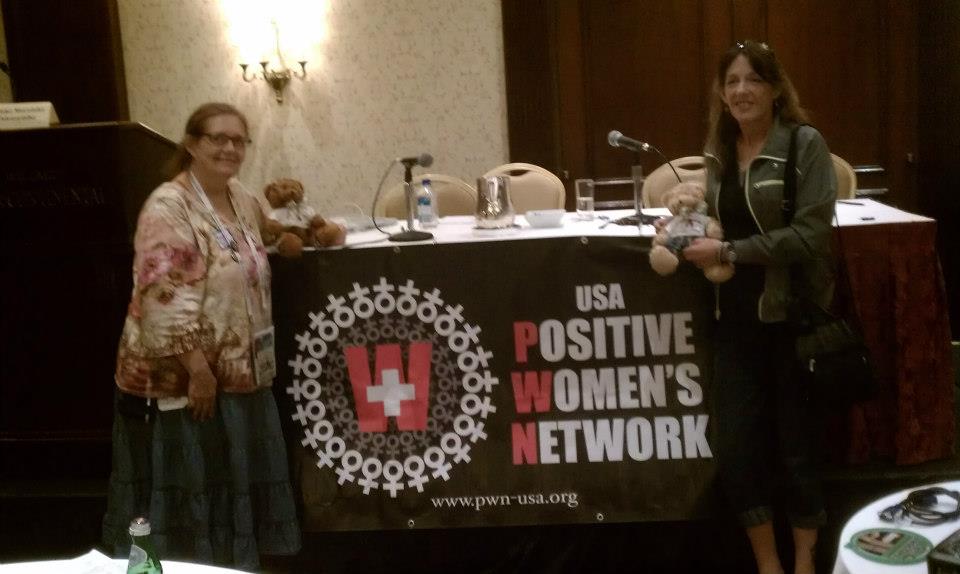 I then started researching, searching, and found my Sisters. Positive Women's Network was holding a "Pre-Summit" the day prior to the start of the Conference. I immediately signed up. Before we even got to meet face to face, thanks to Pre-Summit webinars, I felt I already knew my sisters. Then once we met...IT WAS ON! We have not stopped in building our relationships.

We took AIDS 2012 by Storm "Turning the Tide"...those not on duty volunteering at the Conference were marching in front of the White House, waving flags, chanting "Nothing For Us Without Us" "All Women All Rights." 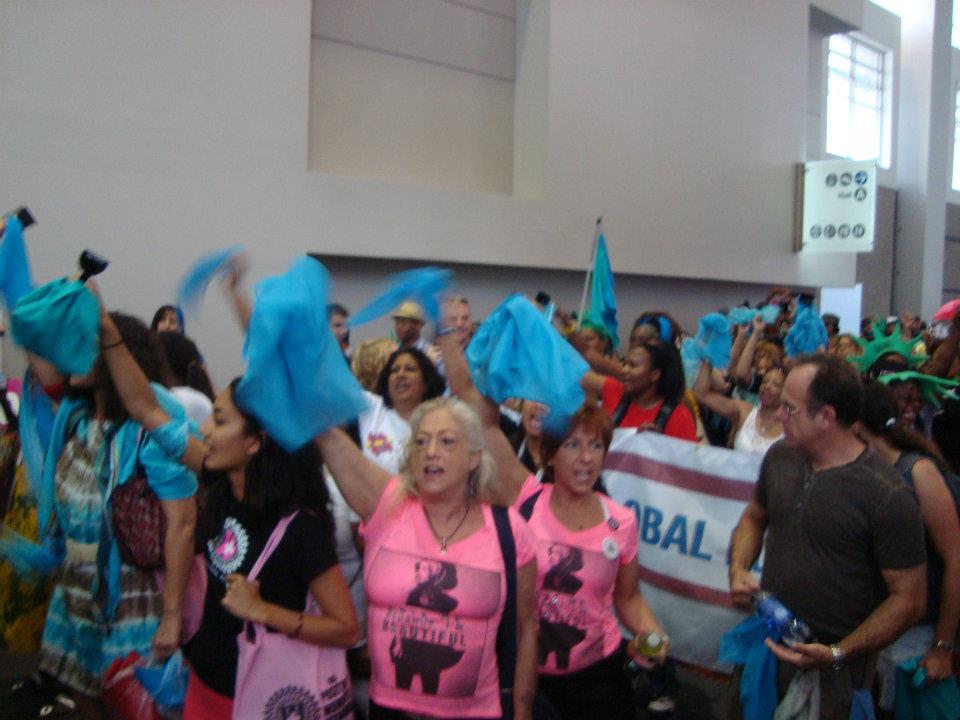 Leading up to AIDS 2012 there was lots of "Twitter" conversations, #AIDS2012, etc. My "chatter" was noticed by Krista Martel at The Well Project. I was amazed! She asked me if I would consider blogging for "A Girl Like Me." When I recovered from the shock at being noticed, I reminded her that I certainly "didn't fit," with me being 57-58 years young at the time. She said that the perspective of a "seasoned" woman would be appreciated by readers...so Here I Am! 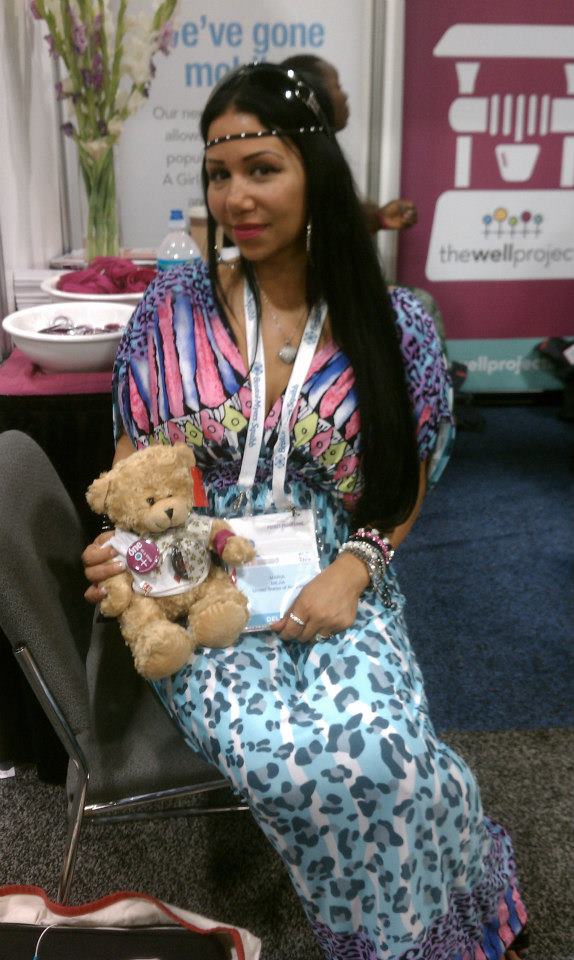 Since then I have traveled to various conferences, meeting powerful women activists along the way.

Amongst the powerful women are "GodMothers, GodDaughters, and Friends." Mary Bowman, though young in age, is one of the longtime survivors, having been born with HIV. Did she let this sidetrack her from greatness? NO, she is "Dandelion Strong," a powerful spoken word artist who gives me chills every time I hear her speak...getting chills right now just thinking about our meeting at AIDS 2012!

And there are the Sister Warrior allies like Marsha Jones and Angela Green who fight right along side of us...sometimes leading the battle cry..."Don't Deny Us as Women!"

AIDS 2012 only motivated us more. Since then we have directed our attention to the glaring lack of research in regards to women living with HIV, demanding seats at the table where decisions are made regarding funding for Ryan White benefits, seeking and receiving seats at PACHA (3 of our sisters currently hold seats!)

Each one of us remain very active in fighting the ongoing spread of HIV, the Stigma that is sadly attached to a virus that in truth is simply acquired by Humans doing what Humans do...nothing more, nothing less. It absolutely is nothing to hang our heads in shame about, and we are certainly no threat to you by being close to you, physically or emotionally! 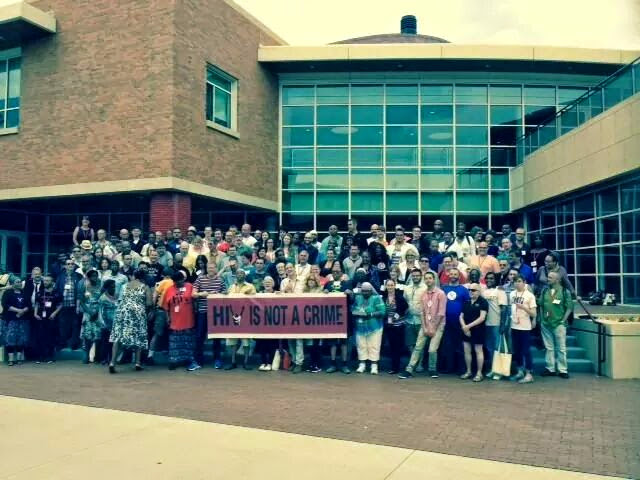 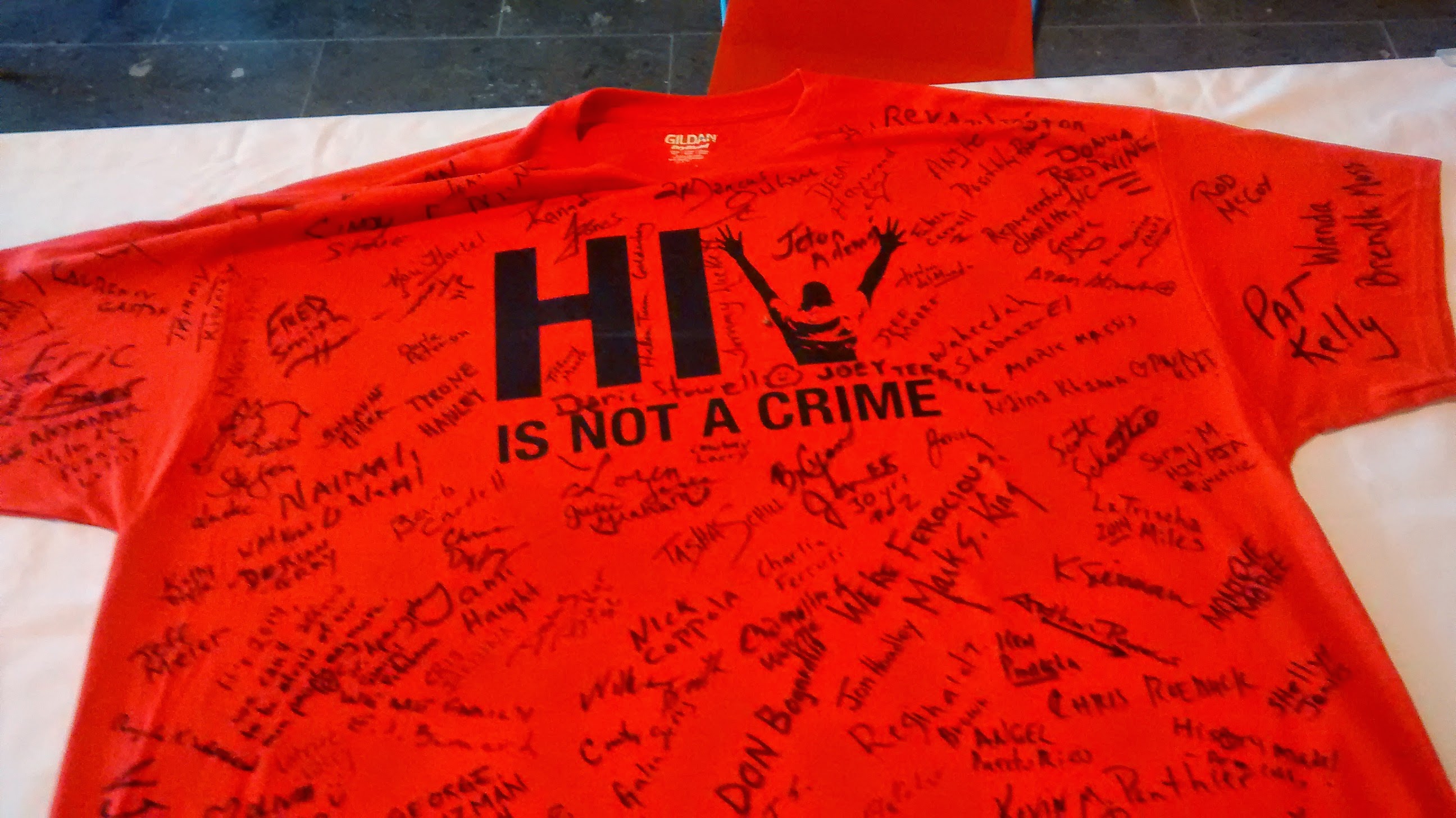 Many of us were part of the planning and attending the inaugural HIV is Not A Crime Summit held June 2014 in Grinnell, Iowa, a summit sadly necessary as too many states and municipalities punish those living with HIV based on Science from 1981, when we knew next to nothing about how the virus is spread etc. Today, as women we are part of the movement demanding that the laws be updated to reflect CURRENT science, to include the facts that the risk of a virally suppressed (undetectable viral load) person has little to no risk of passing on the virus, that there is PrEP available to be used in serodiscordant relationships as an additional means of prevention. 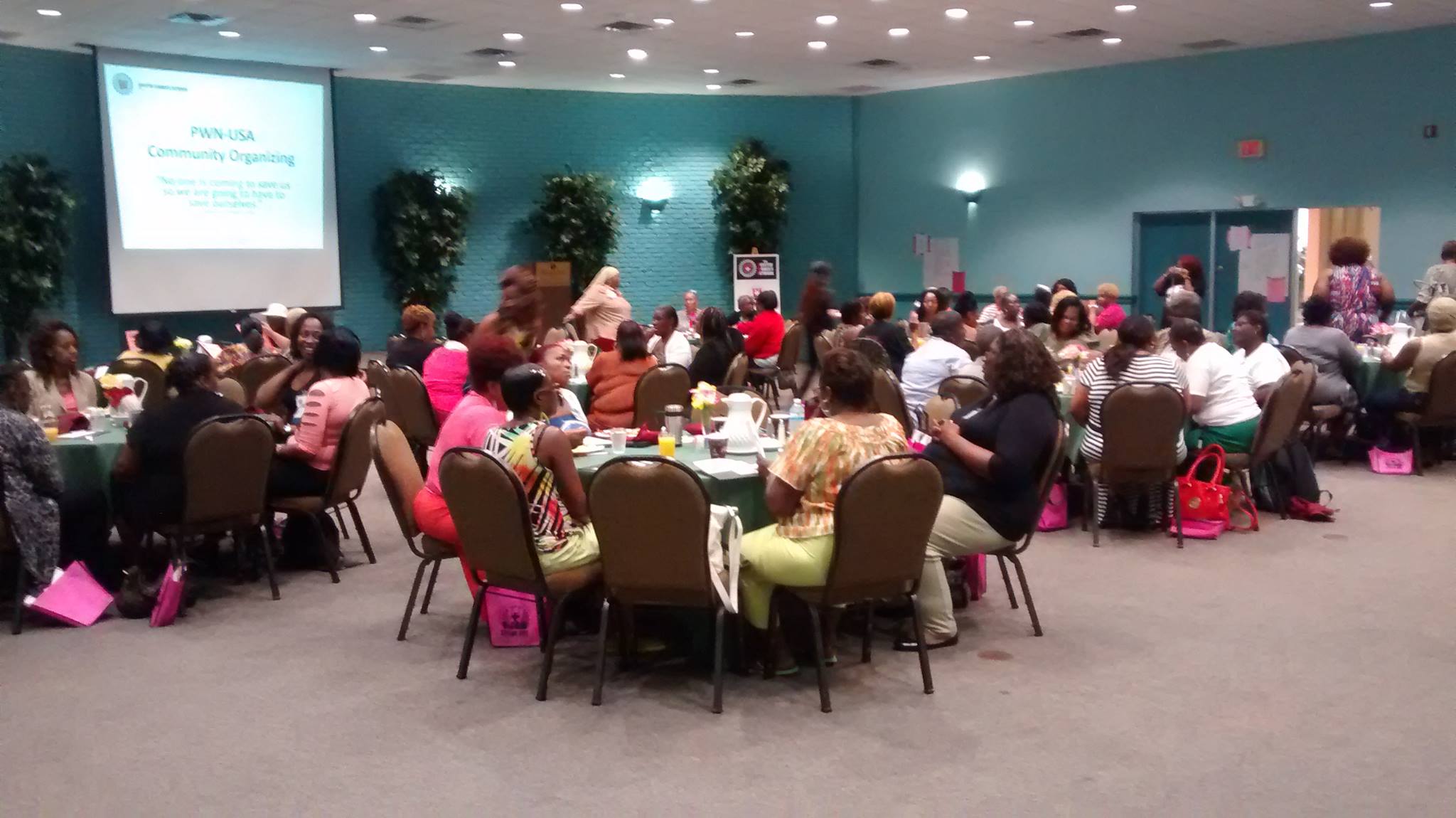 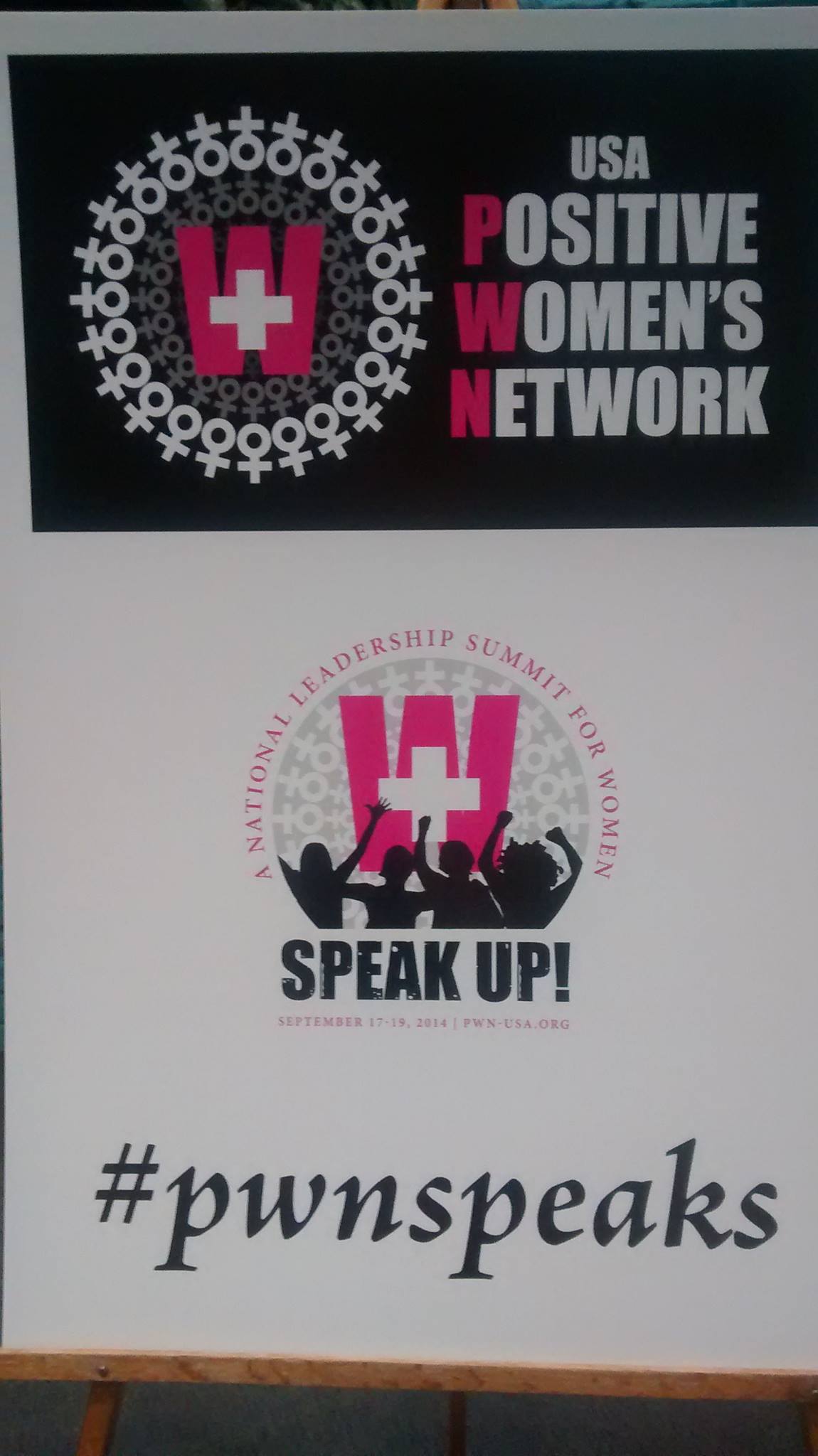 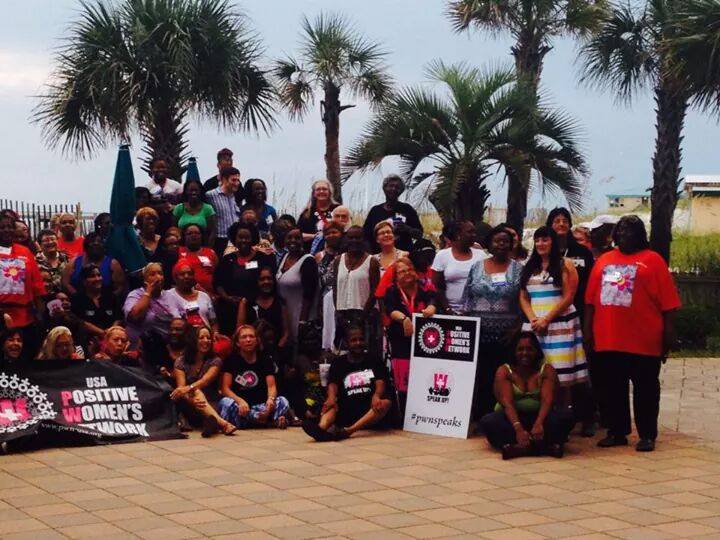 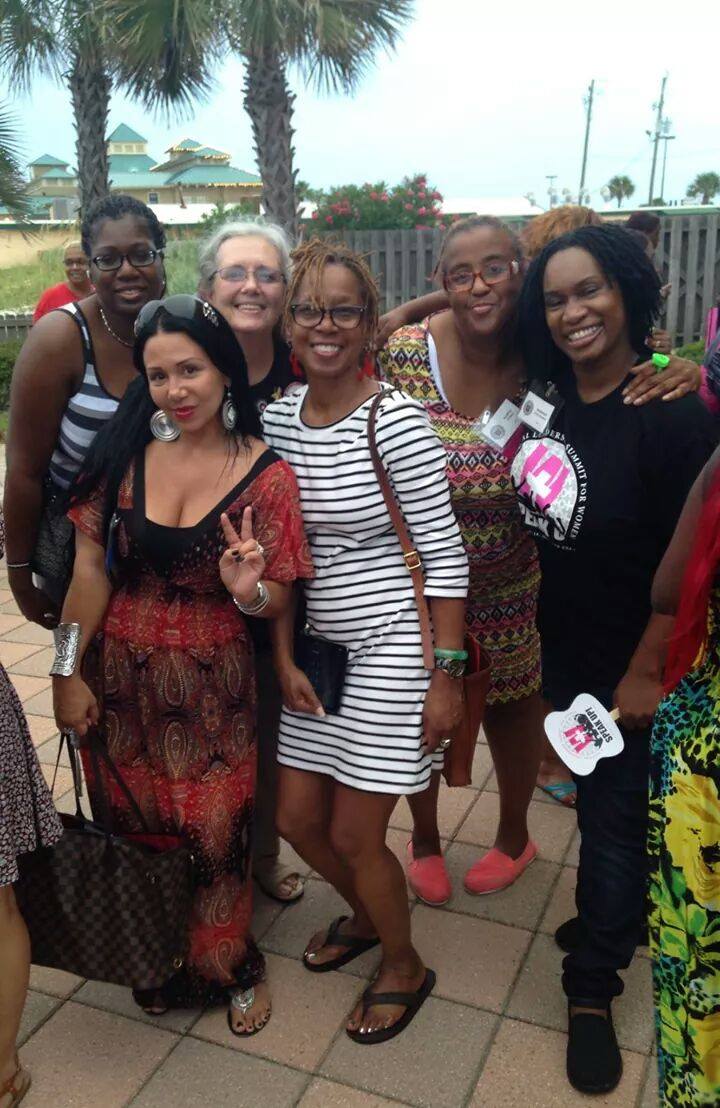 In September 2014, we Sister Warriors converged at Fort Walton Beach, Florida, for Positive Women's Network's Speak Up Summit. There we discussed the many issues still facing women living with HIV...We also tallied up the cumulative number of years of HIV in the room...there were 26 tables of ladies...totaling TWO THOUSAND SIXTY EIGHT YEARS!

Women still must fight for the right to be a part of ongoing conversations regarding living with HIV, how treatment is not a one size (or gender) fits all, being included in clinical trials, being consulted on the "language" used in talking about HIV...

Even having proven our existence, that we have been a part of HIV from the very beginning, Sister Warriors must continue to fight for our voices to be heard above the denials...but trust and believe me...Our Voices will Forever Be Heard!

Nothing For Us Without Us!
Be the Change!
Stronger Together!
Lead By Example!
Be The Change!