Ciarra Covin and Heather O'Connor: Hearts and Minds of The Well Project 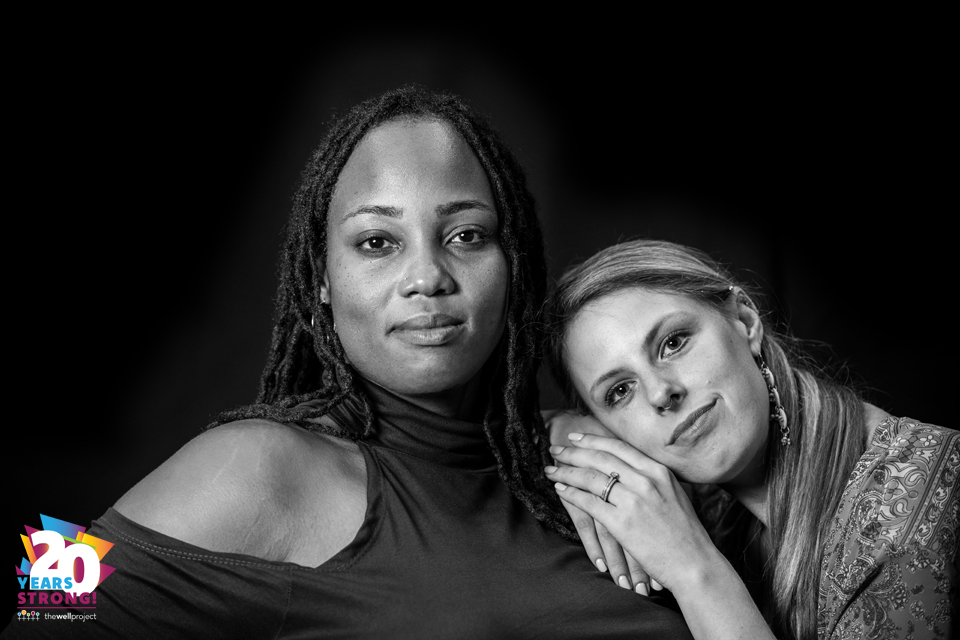 Ciarra "Ci Ci" Covin: I was 19 years old. It was May before the last year of college. I went to the clinic to get birth control – because it was gonna be a hot girl summer and I wanted to make sure I didn't get pregnant. I had this job, a car, an apartment, and I was gonna have my hands on a degree in family and consumer sciences from the University of Georgia. I was on top of the world, and with my HIV diagnosis, everything plummeted.

I didn't have community. I was a Black girl at a PWI (predominantly white institution). I felt really ostracized anyway, and was just kind of forging my own path with the limited family that I had, which was my parents and my siblings down South. Growing up, my dad being Jamaican, he said We don't need friends. I think it is a cultural thing.

For me, what has changed is that I realized that there are different types of communities. I'm helping my son, Zion, build that out right now. We have a Karate community, a school community, after-school activity community, neighborhood community. I have different pockets of community that I can pull on for different things – The Well Project being one of them.

Heather Rhea O'Connor: At the time I found out I was living with HIV I was dancing with a company in Richmond, Virginia, and teaching for an education outreach program. I was living with Rory at the time. We'd been dating for two years. We were very much going through learning one another, sharing space, all the things that come along with relationships that are hard anyways. Adding an HIV diagnosis on top of that sort of split the grid for me. It made me super resistant to being loved. Like the idea of being with me could have been really nice, but now it can't be because I'm living with HIV.

I created barriers between myself and the community I did have. Finding out I was living with HIV was such an internal thing that I couldn't let anybody else in at the time. It was so hard for me to normalize it for myself, I couldn't talk to my community about it.

I really tried hard to push Rory away from me after I was diagnosed. I was just so shut off from everything. I told him, you can leave – you should leave. But then he ended up proposing to me, which was really cool, because he could have left, and he chose to stay – and stay for good. That changed our relationship and made it deeper for us. 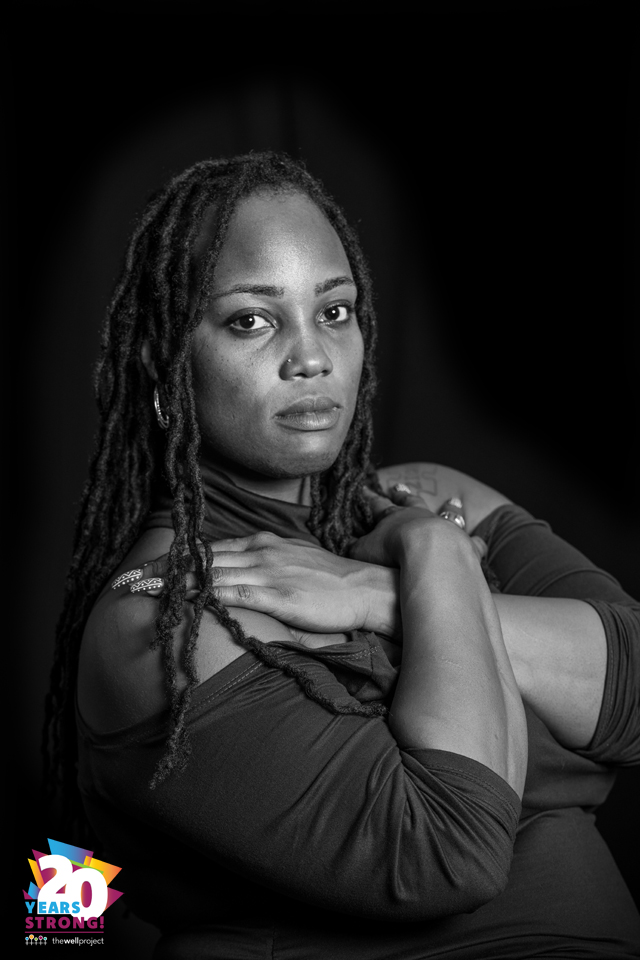 CC: For 10 years I thought I was the only person in the world living with HIV. I would always disclose, kind of hoping the other person would be like, Me, too. It hasn't happened as many times as I thought it would. Twice, I've had it happen. That was me seeking community. I needed somebody that could relate. People could feel bad for me or be sympathetic, and that's not what I needed. When I started finding one person, and they knew some people, then they knew some people – then I said, okay, I'm not the only person.

HO: I decided to make a dance video. I posted on social media with an explanation of my diagnosis. It was a shift from me feeling like I was hiding such a big part of myself from everyone, to deciding that if I'm gonna be living with HIV I'm gonna do it out loud, and the people that don't accept me are not meant to be in my life. That opened the doors to other people reaching out who were also living with HIV. But until I became involved with The Well Project, I had never shared space with other women living with HIV. Now that I have done that, it's immeasurable – there's nothing like being supported by people who get it.

CC: I had been speaking since I got diagnosed in 2008 – Boys and Girls Clubs, wherever anyone would invite me to speak, I would go. At my last job I was a case worker for the Commonwealth of Pennsylvania, and I was miserable. I remember standing in the office one day and saying, I just wish I could travel the world and talk about HIV. I left the job – a job where I had been paid the most money I ever made in my life. I left all the benefits, the retirement package, the insurance, everything.

I started putting a lot of effort into my own advocacy work. I started a blog called Healing Is Voluntary. That was a direct result of me announcing to my Facebook that I was living with HIV. I felt some responsibility: What do you do after you tell somebody that you're living with HIV? I felt like I needed to educate.

Healing Is Voluntary started coming to life, and that was all my healing. Anything I had experienced I started pouring out into blogs. Maria Mejia had "HIV" in her name; I think that's how I came across her in a search. I'm like, Hey can you read my blog? Maria was like, Why aren't you blogging for us? That's when she got me linked with The Well Project.

I was literally sending in the same blogs from my website – which was full of so much freedom and I could do whatever I wanted to up there – and now this white-facing organization (that's what it looked like to me at the time), they're posting them on A Girl Like Me, not watering my voice down, I didn't have to code switch or anything, I'm talking about HIV, and they get it, and they're validating these feelings? I just kept writing and writing. I felt like I was writing for my life.

HO: When COVID hit I got laid off. I really wanted to shift my focus in life to some sort of HIV advocacy. At that point I had had my daughter, and I did breastfeed her. I also came across Maria and asked, How do I get into advocacy? She said, Start blogging for The Well Project. I started blogging, and The Well Project did an interview with me about breastfeeding Aurora. That was my first real experience with The Well Project. But I will say, when I was very first diagnosed and I was looking online for anything about HIV, I did come across The Well Project and read the blogs. So I was excited to get involved.

I remember sitting on that panel, crying. Marielle Gross was talking about the possible benefits of breastfeeding, and how it didn't matter if the parent was living with HIV or not, the benefits were still there. I remember thinking, If I am going to have a child, I'm gonna wait till the CDC updates their guidelines. I thought I had some time ...

HO: I remember Ci Ci doing Facebook Lives and she would talk about breastfeeding and be like, Yeah, that Heather girl. She's pretty decent. Then Ci Ci and I got to talking, and Ci Ci was really supportive in my trying to get into advocacy and was giving me tips. 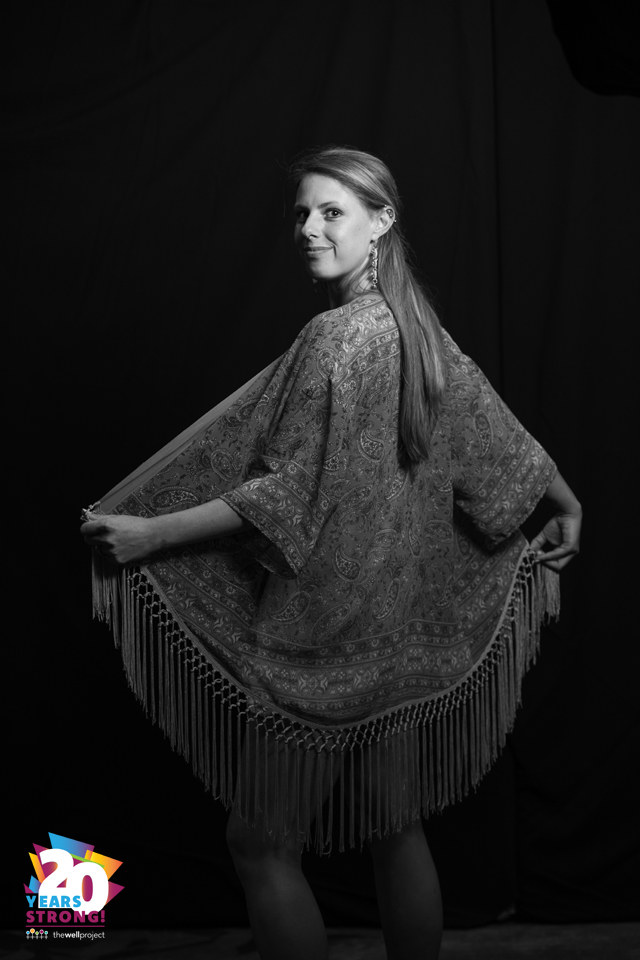 I think the biggest thing that we connected on is the fact that I was able to call out my white privilege. Being able to share both sides of the story really brought us together.

CC: That's the absolute truth. I had been shut down from my first provider for wanting to breastfeed. By the time I got pregnant with my daughter, Zuri, I had community, so it wasn't like I didn't have anyone to come back and talk to and brainstorm with and see how can I navigate this bad situation. Heather has been a big part of that community.

HO: I remember getting the call from Ci Ci, really emotional and upset. She asked me, How did you get past this initial conversation about breastfeeding? I explained to her that it was a very different experience for me. My doctor was extremely supportive off the bat.

CC: Living as a Black person, especially in the South, can feel like a gaslit experience. To be able to work with people who understand that that experience of racism is true and not something that I'm just making up in my head, and to be able to address that in the context of breastfeeding and HIV, has been life changing.

I feel extremely fortunate to have landed with The Well Project. The fact that I work with nothing but women all day kinda is a dream – being able to have a community like that, a flexible community that is led with compassion and integrity.

HO: There's definitely something to say about being in an organization where you truly are being seen and heard. You're not just the product that you produce; you're the full human being that comes with that product that has kids, and other stressors, and ups and downs. That truly means so much.

My relationship with Ci Ci has totally helped me to stand up for myself. She's taught me that it's not normal for people to use me because I can do something, and to know my worth and know what I can do, and that that's valued and will be valued somewhere else.

CC: Being an open face for breastfeeding and HIV, people are gonna come to me, but then I funnel them straight to The Well Project, because that's where the educational resources are. I would like to think of myself as a vessel.

HO: I definitely feel like a vessel. Ci Ci and I have worked together to make sure that no woman will feel like she's falling through the cracks or not being heard. Giving women who reach out to us a platform to be able to share and be vulnerable, and getting them the assistance they need, has been extremely valuable. In our own advocacy, we do different things but we still are connected with one another, building this web for women to come in and create their own space within it.