I had an epiphany this morning. Funny how they sneak up on you. Not only that, but funny how they are usually shit you already know on some level, but now, all of a sudden, you KNOW, know. I wanted to punch someone in the throat for saying some dumb annoying thing to me about HIV. I was trying to compartmentalize and find a better way than violence to deal. 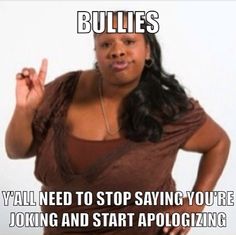 I was bullied a little as a young girl. Not badly. I either ignored it (pretended to) to seem unbothered, or I was PISSED and ready to fight. I had either one reaction or the other mostly. I only cried once or twice that I remember. It did get bad enough once, or rather, I was fed up enough once, for it to escalate into a physical altercation with a family member whose seeming joy in life was to make me miserable. To be completely transparent - while physical violence is never the answer, it felt GOOD to get that off my chest at the time. To lay hurtful hands on the one hurting me. I wasn't even upset at being punished. It was a tiny lesson for him. It took a while for him to start picking on me again. He did though unfortunately.

The use of the term "bullied a little" is relative I suppose. Any is harmful to the psyche. It wasn't enough to make me want to do self-harm (thank God), didn't keep me from school or having friends, and adults were nudging/reminding/pushing me to think of it as "teasing" and "character building" as opposed to actual bullying. (We need to stop doing this to children by the way!) Adults will tell kids that the bully is jealous of something you have. That they are unhappy themselves, or lack something inside, so they lash out. Hurt people hurt people.

Why I was bullied is less important than the bullying itself, (the way I talked and looked and the things I liked) and more about the scars from it that lingered. They find things that you can't control to pick on you for most often which is even more frustrating! Why are you picking on someone for a hair color, or a stutter, or a defect from birth? It left me a little defensive, a little insecure, and those things took a while to sort through. I was also imprinted with a sense of needing to protect the little guy. Even when I am not the one the behavior is leveled at, I feel the compulsion to speak up. Even now, especially now, when it comes to my patients, as a positive person who hates to see people being bullied for something they can't control.

Being hurt by a careless comment about your status is like a bee sting. It unexpectedly hurts. It can set you back and put you in a negative headspace. Exposing you to stigma. Inadvertently causing you shame. Lord! I can identify! I have been on edge and all in my feelings lately. Partially because I have disclosed to a couple of people within the last couple of months, and their very different reactions have me all over the place emotionally. My negative feelings about my status are internal stigma, and I have to sort them out. It only happens now and then, but it happens. People being careless about my status feels a lot like being bullied.

(That's not the epiphany though.)

One of the most frustrating things about disclosing status is not only HOW they will take it, but what will they DO WITH it? Are they going to be respectful of the vulnerability it takes to give away a piece of yourself, or will they do like this instance above, and carelessly stigmatize (and bully) me for knowing my status??? Bringing up my status in a public setting without my permission is a form of stigmatization. I may not want everyone to know!! Telling someone who may be interested in me that I have HIV without my permission is stigmatizing. Projections of YOUR fears and misinformation on what it is to be an HIV positive person is a form of stigma.

(That's still not the epiphany.)

People expose you to stigma in a million subtle ways, a hundred not-so-subtle purposeful ways, and sometimes do it on accident. Sometimes they KNOW, sometimes it's lack of knowledge.

Here is the epiphany:

Sometimes when people stigmatize you, it is self-preservation and self-affirmation on the part of the person doing it. If it sounds like I'm making excuses for them, I am not. At all. It's just what occurred to me as I was thinking about how to heal and avoid the sting. It is bullying and stigma, but in the twisted way of bullying, it affirms something in the mind or spirit of the person doing it. If a bully can make you feel bad about what's "wrong" with you, it reminds them of what's "right" with them.

You have HIV, not them. You (arguably) made a choice or landed in a circumstance that got you HIV, not them. They are healthy (whatever that means) and do not have to face their own mortality, you do. 30 years of disgrace, death, and condemnation is yours to cope with. They don't have to do anything except shake their head or finger at you. Shame, shame. Is it any wonder (as hurtful as it is), that they are SO grateful it's YOU and NOT THEM they would point it out? It's like when you hear about a fire or shooting where people you know are - then find out your people are okay. You still feel bad for those affected and hurt, but you still get that little burst of gratefulness and joy it's not YOUR loved ones or YOU that were hurt. Does that make sense? Subconsciously or purposely, it's what humans do. I damn sure wish they would resist the urge, or find a better road to self-actualization, but it stupidly makes sense.

Thank you so so much for

Thank you so so much for sharing. I agree with you Stigmatization is bullying.

I completely agree with your views on stigma and I just want to say thank you for speaking up and out, God bless love!