Skip to main content
Home > A Girl Like Me > Blogs > My First Year as Executive Director: The Good, the Bad, and the Awesome
A Girl Like Me Logo

My First Year as Executive Director: The Good, the Bad, and the Awesome

As the leaves started to change and my favorite season of the year began, I realized that it has been just a little over a year since I became executive director of The Well Project, which made me reflect on some of the highs and lows of the very busy past 12+ months!

As some of you know, I joined The Well Project in 2009 as the director of online services, and brought with me a long history of work in the field of HIV. I began working in HIV education in 1995, shortly after my sister was diagnosed with AIDS. Based on her low number of T-cells (less than 100), she had been living with HIV/AIDS for quite a long time, and was diagnosed at a time when the medical community was scrambling to find effective treatments. Having been an activist in many areas including women's rights, human justice, and the environment, I was struck by the outrageous degree of stigma that was attached to the disease, as well as how limited the resources were for women. After my sister passed away in 1998 from AIDS-related causes (which I believe might have been prevented with improved knowledge and care), I was determined to continue my fight advocating for, and alongside, women living with HIV.

When I was offered the role of executive director, I was very excited, but also a bit scared! In addition to my work, my family (my husband, 11 year-old daughter, and 7 year-old son), active engagement in my kids' schools, and community-related efforts, take up a lot of time too! Like many already stretched working moms, I wasn't sure how much more responsibility I could take on. Was I ready for this challenge? Not to mention the size of the shoes I would be filling! The Well Project was founded by Dawn Averitt in 2002, and for those of you who don't know Dawn, she is one of the most prominent and well-respected HIV/AIDS advocates in the United States. I've had the honor of knowing and working with her in various capacities over the past 20 years, but the idea of stepping in as the primary leader of her organization was daunting, to say the least!

In the end, I couldn't resist the opportunity to lead the organization that I believe in so strongly. The Well Project had also become a family to me, and the chance to plant new seeds within this organization and watch them grow was just too exciting to pass up.

Well, that first year is over and I couldn't be happier about my decision. The year has contained a number of very important accomplishments. In addition to my taking on the role of executive director, we further supplemented our leadership by adding three remarkable women to our board of directors. We completely overhauled our website to ensure improved functionality, broader global access, and increased social connectivity. We developed and formed our first community advisory board, an international group of women living with HIV who will provide input and insights into many of our activities. Our annual Women's Research Initiative on HIV/AIDS (WRI) meeting brought together a cross-disciplinary group of thought leaders to address the vitally important role of violence and trauma among women with HIV. And we successfully executed our first-ever major fundraising campaign targeting private donors, raising more than $55,000.

In some ways though, I am even prouder of the more personal highlights of the past year. Our A Girl Like Me bloggers have had so many of their own accomplishments this year – earning and advancing their work on academic degrees, taking on roles with advisory boards and the Ryan White Planning Council, speaking at HIV meetings like USCA, having their stories highlighted in major news outlets, and constantly inspiring and helping others by sharing their experiences. With the addition of four new women in the past year, the site now features over 20 active bloggers, with many new women soon to join. 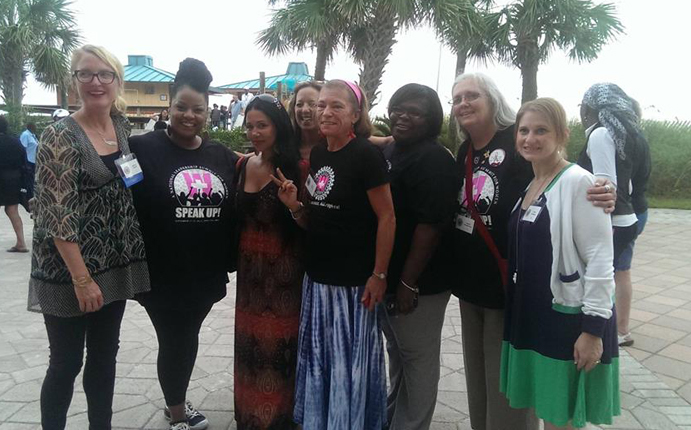 We have been carefully building an advocacy program that provides women living with HIV with the tools to voice the needs and experiences of their communities and were able to send eight women to Positive Women's Network-USA's first National Leadership Summit for Women, where we conducted a Treatment Advocacy 101 workshop.

And we have been extending the partnerships that are so important in our field. One of our primary goals is to provide a community of support by connecting women and girls living with HIV across the globe – to each other and to life-saving information. To that end, we have featured 15 new partners in the last year, including many leading women's organizations including PWN-USA, SisterLove, Christie's Place, U.S. Women and PrEP Working Group, ATHENA, and many more with whom we share aligned missions. We have also been lucky enough to begin working with Translators without Borders and EasyLing on our globalization initiative.

None of that is to say that there haven't been bumps along the way. There were (and still are) plenty of days when I didn't know how I would get it all done (and a few tears were shed), a frustration I am sure that many of you can relate to. Sometimes I feel like I'm trying to balance the needs of The Well Project family with the needs of my own personal family. (My 11 year old daughter has whole-heartedly embraced the tween spirit as she entered middle school—and I have decided that managing this new stage could be a full-time job in and of itself!)

It has also proven challenging to ensure that women's voices remain relevant in the HIV arena today. Funding is becoming more and more limited and sometimes it feels like the dollars dedicated to women in HIV represent an ever-decreasing piece of the pie. Keeping positive in that environment isn't always easy, however I am extremely grateful to all of our funding partners who recognize the need for our work and continue to support us!

But at the end of the day, I am very thankful to be able to serve The Well Project community along with such a dedicated team and advisors. As with any family, there have been ups and downs, but I feel honored to be able to lead such an amazing organization. Together we can, and will, change the tide of the HIV epidemic…one woman at a time.

From my families to yours…
Krista Martel