In this blog I would like to begin to explore the issue of side effects from Combination Antiretroviral Therapy (cART). Admitting that they even exist can be difficult when we are told repeatedly that our drugs are "well-tolerated." However, I have found that acknowledging side effects is essential to reaching out, getting help and continuing to run the HIV marathon.

Anyone who has watched a major marathon knows that out of the thousands that complete it, just a trickle of world-class front runners cross the finish line within the first five minutes of the end of the race. They are followed by a slightly larger stream of elite runners which are followed by an even bigger stream of very good runners and onwards until we get to a sea of runners trotting doggedly over the finish line.

In the world of HIV treatment we have frontrunners just like elite marathoners who take cART, respond well to the medications and have no side effects or complications. By definition, only a few can be front runners. It has been my experience that most of us, like most marathoners, make up a sea of humanity who balances side effects with daily life and encounters medical challenges along the way.

By treatment standards, my doctors have told me I am a front-runner. My viral load remains undetectable and my CD4 count high. I am able to play, work, love, worship and perform all of the Instrumental Activities of Daily Living expected of a middle-aged woman. Because I am considered a front-runner, my infectious disease doctors through the years have presented me with the half-affirmation/half-command at each appointment, "and these drugs are well-tolerated?" Over time I learned to give the correct response which is an enthusiastic "yes!" After all, I am alive, HIV remains at bay, and my organs still work. Yet over the years I have developed a variety of side effects. Some of these were temporary and some are permanent, staying with me as a reminder of what I have survived. 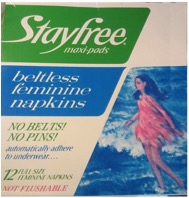 Acknowledging side effects reminds me of the lessons learned in my fifth grade "life education" class. "Life education" was a polite euphemism for sex education and in these classes we watched film strips that explained puberty and what changes we could expect to experience in our own bodies. The narrator reassured girls that menstruation was both "natural" and "painless." Imagine my surprise then, when I got my period in eighth grade and discovered the crimson, sweating, breathless pain that accompanied it. In fact this new kind of pain was so bad for my older sister that she even passed out from its intensity. I felt like we had betrayed all of those film strip authorities and that we were somehow not menstruating correctly. I was sure that there was some secret key to painless menstruation, waiting to be unearthed. I remember staring at the illustration on the box of Stayfree maxi-pads depicting a petite woman in a mini dress, trotting happily across the shoreline surf, and wondering what I was doing wrong.

In the first years of taking cART , I felt the same way--that if I would just try harder, sleep better, eat smarter, exercise the right amount or keep a more positive outlook I would fulfill the experts' expectations of me as a front-runner and find the nirvana of a side-effect free life: It was evidently mine for the taking, if I would just straighten up. Therefore, each time I affirmed my doctors' statement "And these drugs are well tolerated," I would sense that twinge in the gut that comes with telling a lie and feel even worse about my own lived experience in my faulty body.

As a teen I finally gave up the idea of correct menstruation when I went off to boarding school, moved into a dormitory with other girls and found out that we all suffered with pain to some degree. Simply knowing this fact was a huge relief. We reached out to each other in our shared pain and embarrassment and in the process learned that each of us had wisdom to share on easing both, whether it be hiding a spare tampon in the cuff of a knee sock, filling a hot water bottle in just the right way to avoid getting air bubble.it or doing a series of yoga stretches to ease cramps. As I learned to share knowledge and experience with other girls, my periods became easier to bear.

Over time, I have given up on the idea of "well-tolerated" cART as well. This process began when I got to know other women with HIV who I could confide in and was reinforced by reading about others experience with cART in blogs and on TheBody. Acknowledging side effects empowered me to do something about them: by learning about our collective experiences I was inspired to read biomedical research on side effects and as a result I have developed a variety of strategies for living with fatigue, a temperamental digestive tract, severe lipoatrophy in my derriere and neuropathy in both feet. I have also learned that when I listen to and talk with other women with HIV, that I don't want to be a front-runner because being exceptional means being alone. I would rather run with the sea of women with HIV, perhaps ordinary, perhaps even a nuisance to our doctors, but always, imperfectly, together.

Thanks you for your insight!

Thanks you for your insight!  I learn something new every day.  I sincerely appreciate the Power of being a Woman.  Your journey and courage Inspire me to work even harder in support of Our fight against HIV/AIDS.