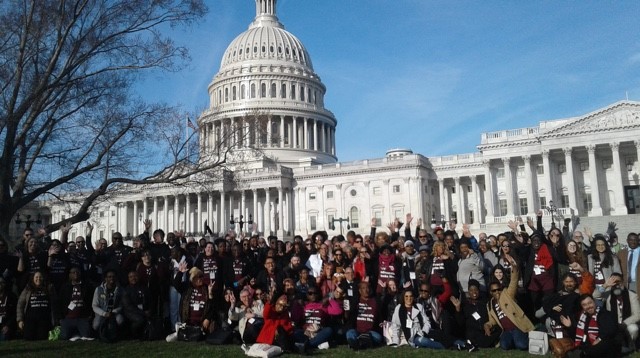 Going to AIDSWatch was a wonderful experience that I'm honored to have been a part of. It was a great learning opportunity that taught me a lot about meeting with your legislators in the nation's capital. I learned how a meeting goes, how to navigate the congressional office buildings, and the importance of comfortable shoes, lol. I met new people and made new friends, expanding my network of colleagues, and I enjoyed the company of old friends who I've grown to have deep feelings for, it's always wonderful to see them again. 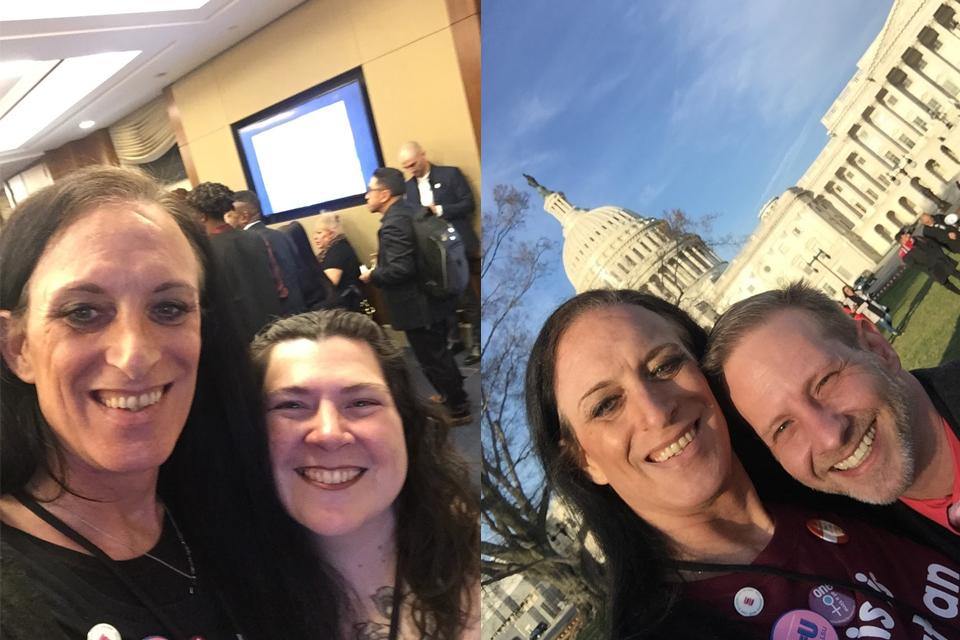 When I first arrived at the host hotel of AIDSWatch I immediately ran into people I knew. I was tired and hungry; it's always a long day when I fly somewhere. My friends wanted to go get something to eat but I had not been to my room yet and still had my suitcase with me, so after taking my luggage to my room I came back downstairs to find some food before going back to my room to rest. My friends' Uber had arrived before I got back to the lobby and they were gone, so I thought I'd investigate the hotel restaurant. By this time, I was with another friend I found in the lobby who felt tired and hungry too so we went together. When we walked into the hotel restaurant there were some people at the bar who recognized me, and I spoke with them for a few minutes. One of them bought me a beer and told me that they had been following my blogs and felt inspired by my writing. I felt over the moon to hear that; there's little more important to me than to know that I've made an impact on someone. I enjoyed a little pleasant conversation with them but had to cut it short when the waitress came to usher my friend and I to our seat. My friend and I ordered a salad, ate, and enjoyed each other's company before returning to our rooms for the evening.

The following morning I was in the lobby early. I wanted to find registration and the rooms where the classes would be held. I was scoping the place before the day got started, lol. It didn't take long for people to start showing up, and when registration opened up I was the first one in. I love getting my name badge. I collect all my name badges and this would be my first AIDSWatch name badge to add to my collection, but I hope not the last. 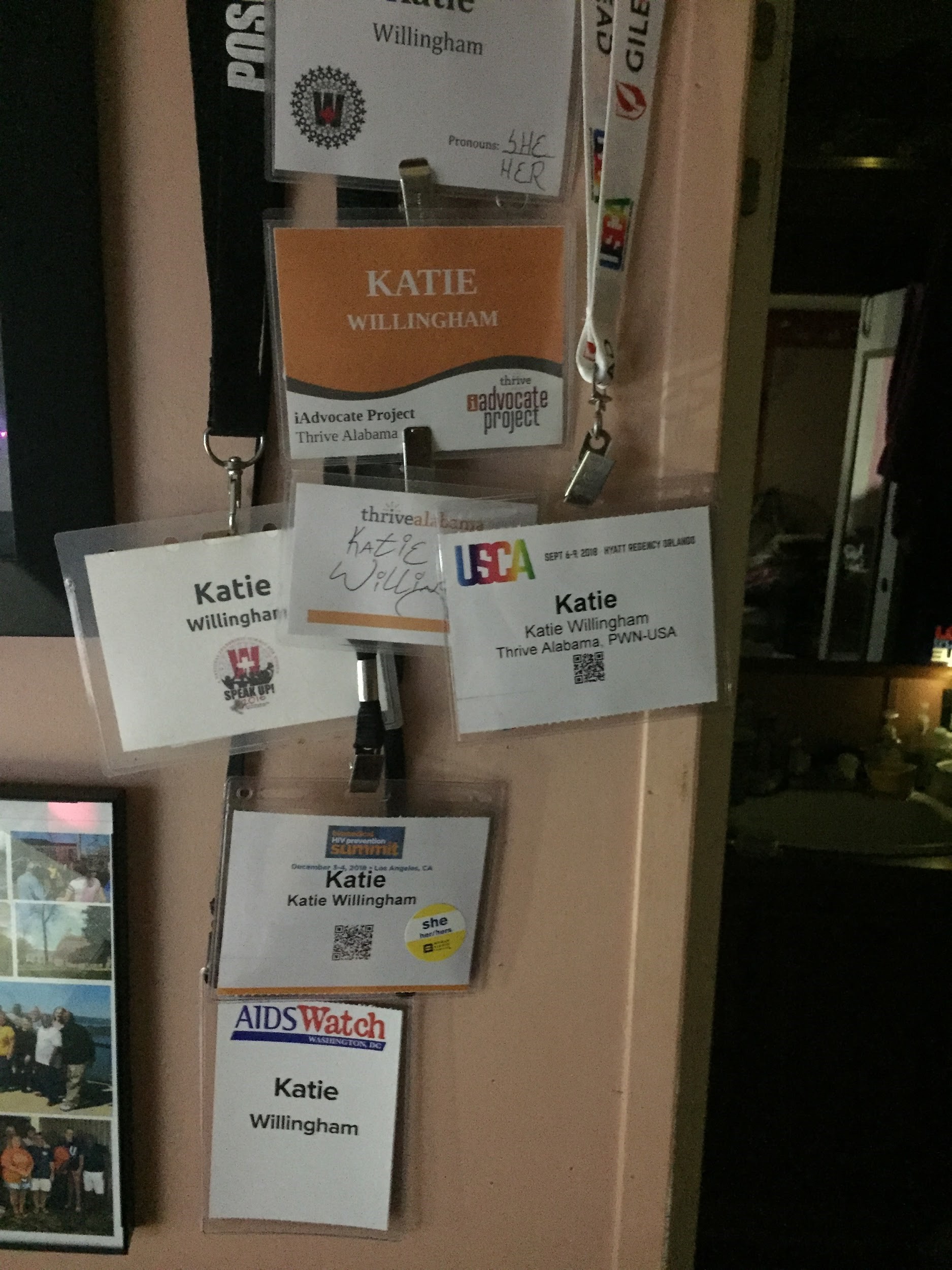 After breakfast concluded, the women of PWN took a group picture together before people began to take the stage to speak on a variety of topics. The grandchildren of Elizabeth Taylor were introduced, and then Dr. Redfield of the CDC came to the podium. I had heard whispers about the CDC owning the patent for Truvada, and there were angry rumblings about the CDC website using the word "infected" to describe people living with HIV, so I already knew that the sparks were about to fly, lol, I wasn't disappointed. Dr. Redfield didn't make it far into his speech when a voice came from the back of the room, "Stop calling us infected!! Language matters!! Your website still calls us infected!!" Then someone gave him a people first language chart. He acknowledged that the CDC was ever learning, and their concerns would be taken into account, but the unrest wasn't over yet. Before he could get back into his speech he was disrupted again, this time about the Truvada patent, but this time Dr. Redfield displayed his political abilities by evading the question. Eventually the unrest about the issue among advocates caused questions on The Hill and now the CDC is re-examining the patent (so I hear). 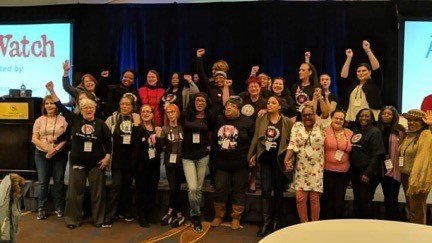 After the CDC grilling, I posed for a picture with two other trans advocates (Achim Howard and Arianna Lint) for an article for The Body.com that was written about transgender representation at AIDSWatch by Charles Sanchez. Then it was time to go to workshops. I attended one about talking to your legislators, sharing your story, elevator speeches, getting the most of your time. Then I attended the U=U workshop with Davina Conner and Dr. Carrie Foote and another about addressing the issues that concern the transgender community. All of the workshops were informative and beneficial and I enjoyed them, but there was no time to rest yet, lol. We had to drive to another building, one of the congressional office buildings, for an awards ceremony mixer, which had an open bar so I thought it to be a perfect way to end the day; don't worry, I didn't go crazy, lol. 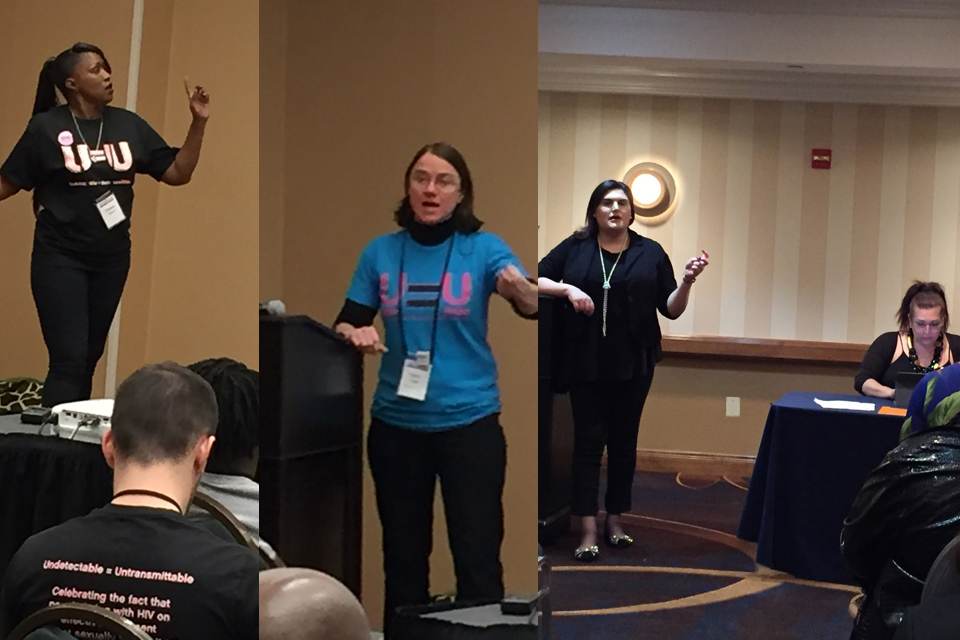 When I got back to my room I was exhausted. I took a shower and climbed into bed and started reading my file, but I don't remember making it far before falling asleep. I woke at five in the morning and got dressed and ready for the day, packed my suitcase, and took it downstairs for the front desk to hold for the day as I was checking out. At seven o'clock we loaded onto buses to take us to the Capitol where we would meet for a group picture, and that's where we would begin our day. 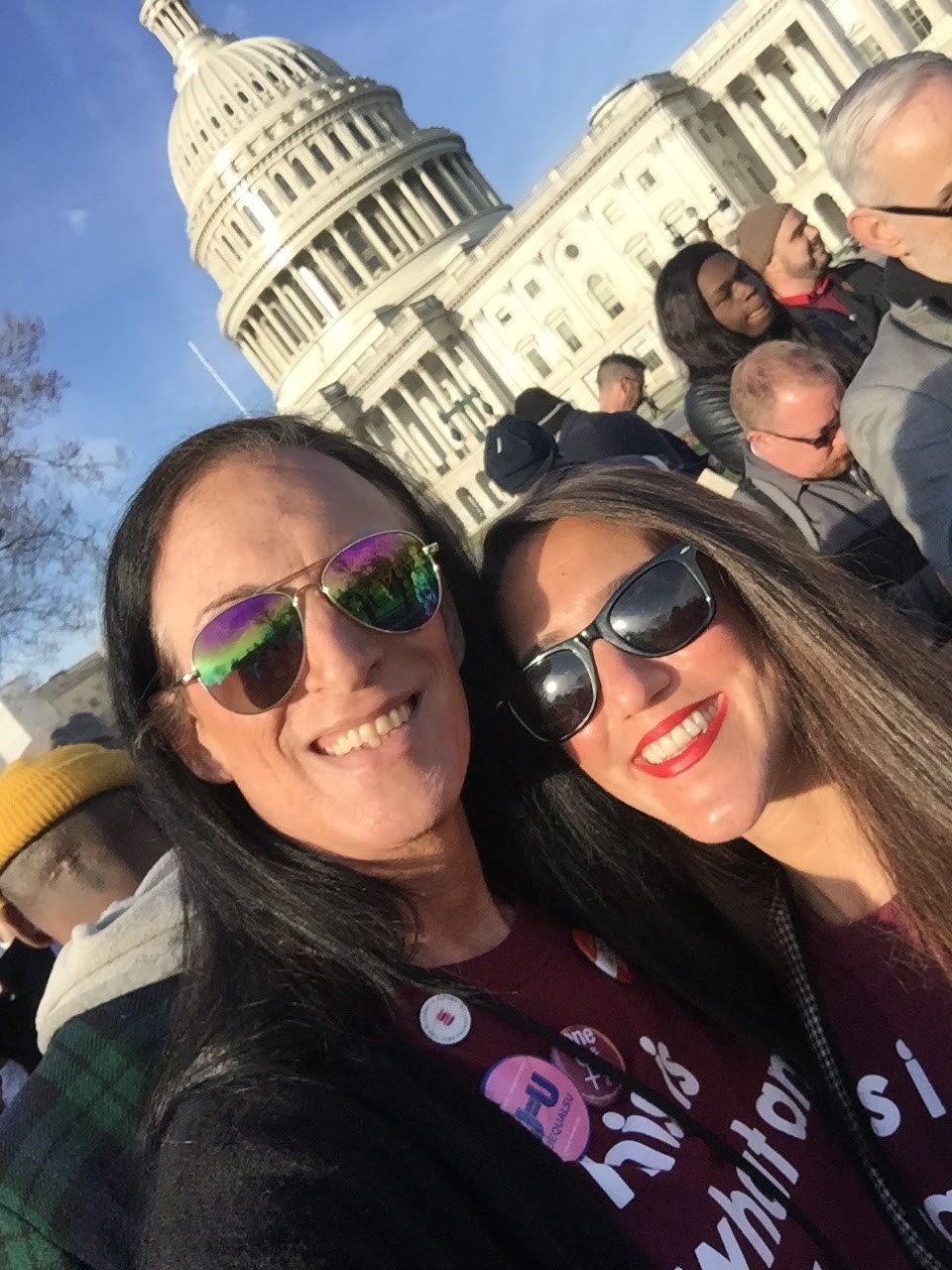 At the group picture I met a girl named Jessie Schwiesow from Alabama whom I had never met before but would be on my team to visit our legislators. We became fast friends and stuck together for the rest of the day. We were both newbies to AIDSWatch and both nervous, but we enjoyed each other's company and conversation so much that I (for one) felt comforted. She spoke in the meetings like she had done this before. I could tell she was nervous but still she spoke deliberately and effectively, swallowing her fear to present issues to lawmakers on behalf of the many who she was there to represent. I was so impressed and inspired by her.

So overall, I had a great experience. I learned a lot, even about myself, I connected with old friends and made new friends, I got a seat at the table where voices are heard and decisions are made, and I learned from the experience how to make my next experience even better. AIDSWatch is an event unlike any conference I've ever attended. At other conferences we talk about and learn what to do, but at AIDSWatch, you talk about and learn what to do… and then go the very next day to do it.

Hope to see you at the next AIDSWatch!! 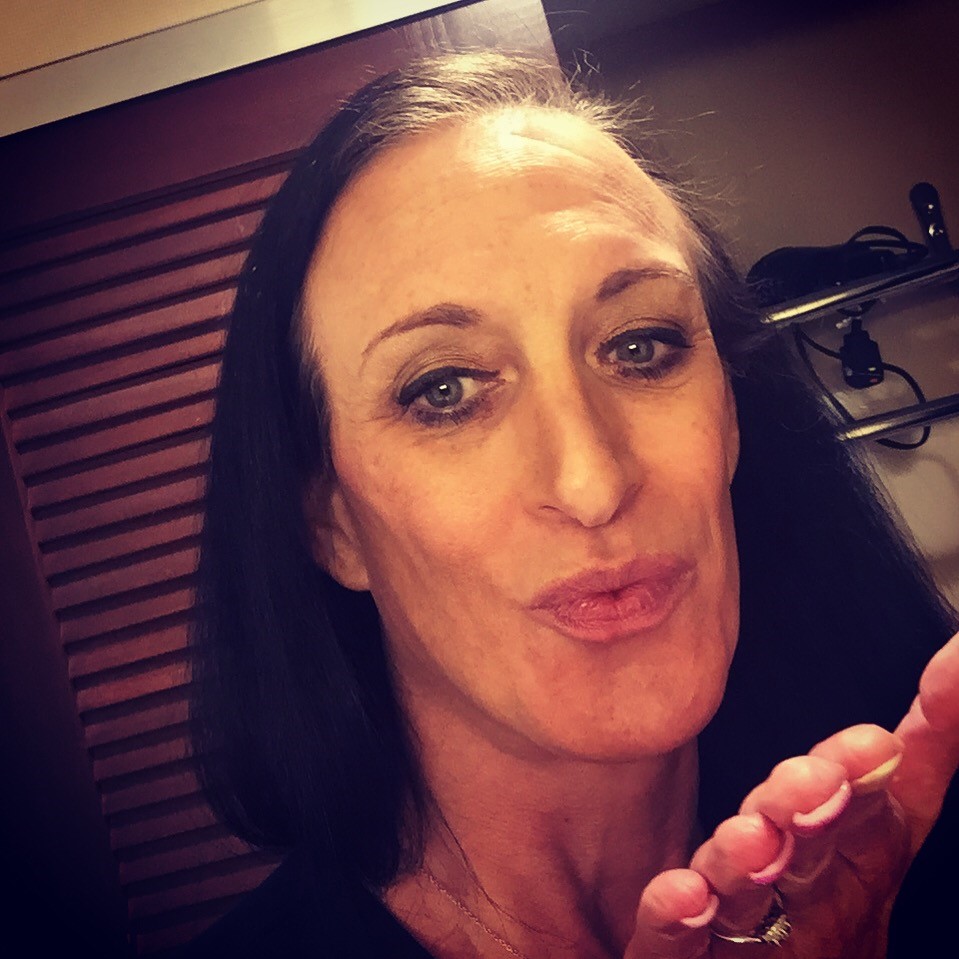 KatieAdsila created Through My Eyes

The Well Project liked the aglm_blog A bouquet of problems

The Well Project liked the aglm_blog Speak Over Yourself