Unsettled, but Settled In

It's not even about Covid and the self-isolation of that, although that is part of it. Covid-19 has made me miss the simple necessities like hugs and nearness and affection, but since I'm considered essential, my routine hasn't changed that much. The lonely isn't just about being of a certain age (almost 50) and being single either, it's not about having HIV or the pain in the butt that HIV status disclosure is either.

Nonetheless, in between babying my frying taco shells so they wouldn't burn, I was taking stock of my lack of a dating life, even pre-Covid, my lack of a sex life (cause you know the two aren't mutually exclusive), and in general my desire for regular company in my life. While low self-esteem isn't generally an issue for me, sometimes I have fat days, or days when I notice my wrinkles more. Or those days when I look at these young women/girls with these amazing figures and time to be perfectly made up every day. 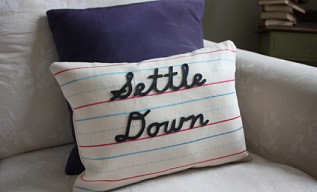 It's striking to note in that moment I started thinking that I see why people settle for less than. You know. Like the older folks used to say about wild ways and fast girls. "She'll settle down". "When you settle down…" "Settle down with a nice man". Less than love, less than being equally yoked, less than knowing you have found the Yin to your Yang. For being just okay with a relationship for the sake of being in a relationship, as opposed to being really happy and satisfied. I was actually musing (reflecting) on who in my life I would settle down with if I were to settle. I literally was in my head thumbing through the last few men I've gotten to know or dated or chatted with- when BAM! I was like "Hold up! Gurrrrl! You are tripping!!!" I had to check myself and remind self that we don't damn settle! (For whatever reason I settle myself down in my head using the third person, lol. Is it just me?)

I said "it's striking to note" because I have long been a champion of being by myself rather than settling for some BS I don't deserve or want. I've been in some relationships that my spirit was unsatisfied with, and unsettled by, longer than I should have been. I stayed longer than I should, not necessarily because I was settling, but because I was trying to MAKE them work, or out of consideration for the other person's feelings. Trying not to hurt someone was more important than my own feeling of hurt and dis-satisfaction. Couldn't say when I decided I was no longer doing that, but I don't any longer. I have learned how to walk away from (or even better- not get involved with) things that don't serve me, don't grow me, or don't teach me something. It makes life less frustrating. Does it also mean less interesting? Maybe. A bit lonelier? Arguably. Most often, I'd rather be lonely than unhappy or taking crap I don't deserve.

The whole idea of settling is very UNSETTLING! It's annoying. It leaves you craving something more. More satisfying. More enriching. Like, look at it like this. You really want a piece of creamy cheesecake- made by an amazing baker that tastes good in your mouth. Lingers on the tongue. Makes you close your eyes and happy dance. Instead what's on the menu is pound cake. From a box. It may be spruced up with fresh strawberries and whip cream, but is it cheesecake?

Relationship wise, you WANT someone who is supportive, believes in you, that you can talk and laugh with. That nourishes your spirit or that makes you more of YOU. That you can provide the same balance and love to. The YIN to your YANG. What happens to many of us too often is we settle for less. We make due with five qualities we like, but put up with 6 qualities we hate, because 5 out of eleven are not terrible odds right? 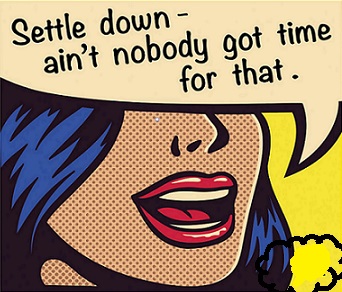 There was an old line in a song that said, "having half a man is better than no man at all." UGH. That's loneliness, self-isolation, singlehood, low self-esteem and the HIV talking ladies. Don't fall for it! As tempting as it is. I was meant for more. For balance. For happiness. For love. I deserve that. I won't get that by settling for 5 out of 11 qualities. Not even by deciding on the five that are most important for me and settling for 2 out of five. I want to make tacos for someone who will appreciate the love I put into making them. For now I suppose that means I am settled into being unsettled. Even if it means some lonely days while I figure it out. Dating is not as fun as it used to be, but I still enjoy it. YOU DESERVE more than 2 out of 5 as well. Don't settle.

Thanks Red for these important words we all need to hear to remind ourselves of our self worth. It's work worth continuing to do! <3

Settle is my cousin.

Ci.Ciiiiii-- Cousin settle is the one no one wants around cus he smokes and his feet stink, but nobody wants to hurt his feelings.