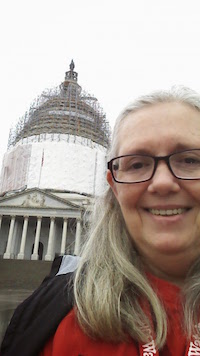 Friends, this is my "releasing ceremony" for my last (who can say if will be my final) relationship. I hope this inspires others to realize there truly is life after heartbreak...though right at the beginning, just like me, you do not believe it.

Billy's birthday was a couple of weeks ago. He was born March 17, 1946, eldest child of his father's second family. The family dynamics I came to understand had a lot to do with him growing into a rigid type A, though I didn't recognize this in him till well into our relationship.

I met Billy after I had stopped my nursing career. I was a waitress and cashier, working 1st and 3rd shifts (we were open 24 hours Thursdays, Fridays and Saturdays) at a local restaurant that Billy came into after he had been to a local jazz club.

I noticed him, he was (is, I presume) a handsome African American man. I honestly paid him little attention at first…because truthfully, I was hit on almost every day by many of the African American men that came into the restaurant...but never by any Caucasian men.

Time Passes... We keep talking, nothing serious, I can tell he is interested, but I am 2 years into living with HIV, having been severely traumatized physically and emotionally by the man who gifted me with HIV (my "giftor" and I lived together for 2 years, 2000-2002, diagnosed HIV July 2002…more about this man at a later date!) so I was understandably hesitant.

Finally, in June of 2004, my Dad got really sick. I had to take a few days off to be with him in the hospital. Billy noticed my absence from work and left a note at the front desk for me with his name and telephone number. I tucked it away and kept working.

A few nights later on one of our 3rd shifts, here comes Billy after having a night at the jazz club. He just opens his arms and hugs me like there was no tomorrow...and it felt like home!

And so it began... In the beginning it was amazing...he was warm, told me within two weeks "I love you." I was stunned. I asked, "How can you say that in just this short amount of time?" He replied "Love is a Choice. I choose to Love you."

Within another few weeks I too told him that I loved him. I was struggling at the time to maintain housing (was not on disability at that time)…he invited me to share his home. He said, "You don't have to work if you don't want to. If you do work, your money is yours."

He was interested and concerned about my health and wellbeing, asking intelligent questions about my HIV, etc. (I of course told him my status before there was sex (though at the end of our relationship he swore I did not). And all things were good for a while...

We moved into a house that was ours together. By then he had decided too that I should start helping to pay for our living expenses...which was reasonable, though not what he had said at the beginning.

I should have recognized while we were moving when he told me to "set up the kitchen how you want it Wanda." Yet after I am done and am proudly showing him the fruits of my labor he immediately rearranges everything (the type A was showing!).

By late 2007...early 2008, things were getting really rocky. I became severely depressed. We had stopped having sex (I later learned that he was having prostate issues, but he never shared that with me until much, much later, after many hurt feelings and hurtful words). Anyway...I stopped taking my meds.

There was horrific flu going around in winter, 2007-2008. I was deathly ill, could barely hold my head up. I credit him with nursing me through that. Then, I started having these odd shooting pains down my face from the side of my head. Shortly after that I started to have a rash that itched, that got worse and worse until one night, at his insistence, I went to the ER. Little did I know that I was suffering from the worst type of Shingles that one can have, Trigeminal Shingles, that impacts a nerve that starts in the side of your head and divides into three branches as it comes under or around the eye, to the nose and the mouth. I, being the lucky woman I am, had all three branches involved.

I was immediately admitted to the hospital where I had worked as an RN for 13 of my 20 years as a nurse. Being mistreated or thoughtlessly treated by a boyfriend is one thing...to be ill-treated by healthcare professionals is another. It was May, 2008, MANY years into our knowledge of HIV AIDS. The doctors and nurses that entered my room...cap, mask, gown, gloves...and the doctors would stay at the doorway and talk. They also denied me pain medication, and trust me when I tell you, the pain was EXCRUCIATING. I had to burst into tears and BEG. Their response initially was one Darvocet, then finally ONE milligram of Morphine. That despite even the nurses saying that was not sufficient, the doctors would not increase the dose.

I left the hospital after being diagnosed with AIDS and now a history of Shingles, and returned home with Billy. He was again courteous, taking great care of me, but the walls were cracking...it was not the same as in the beginning. Despite my still loving him, something just was never right again. He was more distant, even though we would be in the same room.

Finally, at the beginning of December 2009, the end happened. For whatever reasons within his mind he decided we were over...locking me out of our home of 6+ years. I was again plunged into such a sense of loss, I did not exercise the legal options that I would have pursued if I had been thinking clearly. I tried calling him. He never answered. I was so brokenhearted.

I was living in my car...until it broke down about three weeks into this ordeal. My son paid for me to stay a week in a local motel. At the end of that week, December 20, 2009, I stayed overnight at the home of a friend of a friend. On the morning of December 21, 2009, I was at a total loss...not sure where I would be sleeping that night. Still not thinking clearly, the people I was staying with called an ally they knew at a local shelter. After speaking with him, sharing that I was living with AIDS, he reminded me of AIDS Care Service (ACS). I called them, speaking with then-Vice President, Katherine White Foster. In less than an hour, she and then-housing coordinator, Cheryl Kiser, came to my rescue! I was taken to ACS transitional housing...to safety…to the beginning of my true healing.

Slowly but surely, I healed...growing stronger and stronger...and becoming the woman that I was always meant to be. What has surprised me as I am writing this is that it was harder to put into words than I thought. But yesterday (March 27) I was at Winston Salem State University, addressing a class called Sex, Gender and Feminist Thought. The topic of the various forms of domestic or intimate partner violence was addressed. I shared openly and honestly about Billy, about letting go...and I think...though I thought I had already said farewell...I finally, completely said, "Farewell Billy Farewell!"

The Well Project is a non-profit organization whose mission is to change the course of the HIV/AIDS pandemic through a unique and comprehensive focus on women and girls. We are a recognized leader in the fight against HIV, revolutionizing the availability and accessibility of meaningful and relevant information designed specifically for women and girls living with HIV. The Well Project does not control, promote, distribute, endorse or market prescribed substances associated with the treatment of HIV/AIDS or related diseases and should in no way take precedence over the qualified assessment and diagnosis of a medical professional or certified physician/doctor. The information contained on this website  is for educational purposes only.

Red40something commented on I'm in a beautiful place.